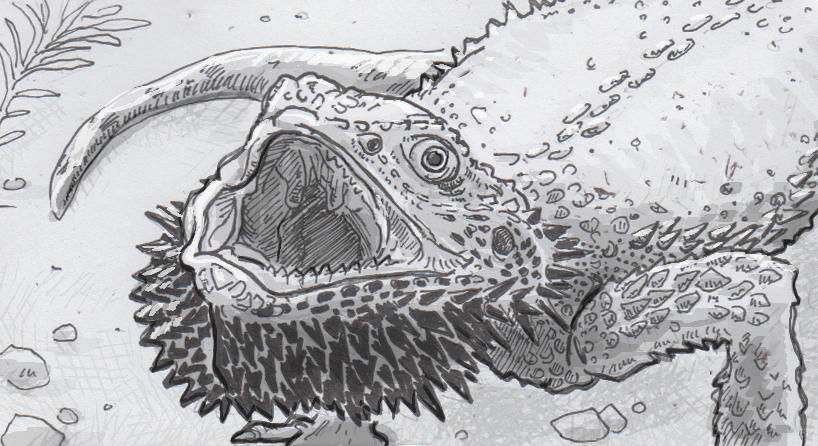 While humans like to pat our fellow mammals on the back for being able to regulate our internal temperatures, it’s a bit of an oversimplification to say reptiles have no say in how hot or cold they are. It’s true that they have to rely outside sources of energy like the sun to warm their bodies, but some species can do more than sit on a rock to kick-start their day. Lizards like the central bearded dragon (Pogona vitticeps) can change the color of their skin, which they can use to better regulate their heat intake. And, it turns out, adjust their markings for communicating with other lizards. Oh, and camouflage, if need be. The question was then how well they could manipulate their color to allow for all these tasks on the same body.

The basics of the bearded dragons’ heat regulation was about what you’d expect. To more efficiently collect heat, they turn a darker color, which can cut early-morning basking time by as much as 22 minutes, sort of like a good cup of coffee to start the day. When getting too hot, they become pale, reflecting more sunlight and decreasing the amount of heat their body absorbs. In general, these shifts in pigmentation follow a daily routine with sunrise and sunset, but they can be adjusted for inclement weather, or when mating season just demands more energy to stay active, at which point these steps towards efficiency may save the lizards 85 hours of basking time.

Bearded dragons also use their coloration and posture to signal to their peers. To express everything from aggression to mating intentions, these reptiles will wave their arms, bob their heads or do repeated “push-up” motions. Many of these behaviors are punctuated by darker coloration on the belly and neck of the animal, sometimes even with spotted patterning. The question was then if these signals would somehow conflict with the need to warm up in the sun, since both goals would be important during a time like mating season.

After experimenting with different temperatures and light exposures, the dragons’ solution seems to be a sort of modular color-change system. Rather than change the color of the entire body to meet a specific temperature goal, the lizards could change the color on their back alone, leaving their belly and neck for possible communication signals. The bearded dragons showed very good control over their coloration in this way, reserving segments of their bodies for specific tasks. While the lizards in this study were captured from the wild, researchers plan to next observe their behavior in the wild to see if they are free to mix and match their coloration when multiple tasks need to be accomplished at once, or if some trade-offs are necessary with their skin.