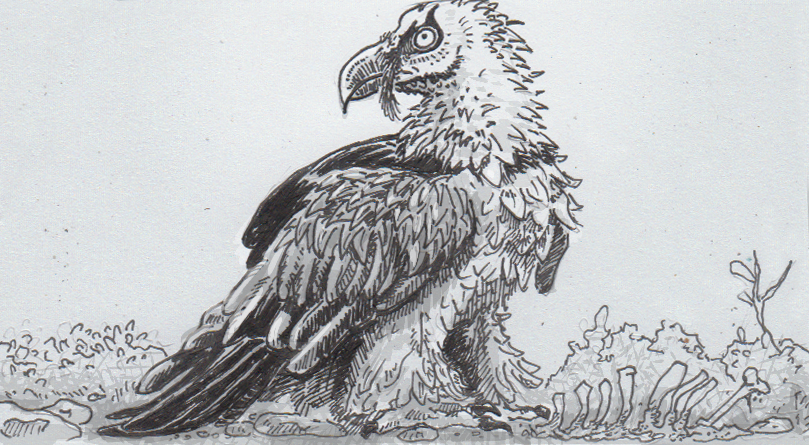 Bearded vultures and the benefits of binging on bone

It’s hard to say if bearded vultures are the least or most picky eaters out there. They basically eat just one thing, but that one thing is something that almost no other animal would add to its menu. By consuming bone for most of their lives, they’ve carved out an amazing niche for themselves, free of competition, hunting or even a mess. The only compromises they need to make are figuring out how to deal with bones that are too big to just swallow.

While other vultures scavenge for soft tissues, bearded vultures (Gypaetus barbatus) have adapted to get all their nutritional needs from the hard stuff. Aside from the obvious abundance of calcium, the bone marrow in the center of our skeletons holds plenty of protein, fat and even potassium. Some carnivores will occasionally chew a bone open, but by fully committing to this diet, bearded vultures can digest bone much more easily than the average predator, thanks to some very powerful stomach acid. Whereas an owl will swallow its food, only to cough up a packet of bones and grit, a bearded vulture can digest whole bones, and have even been known to eat owl leftovers for the bones inside.

While these vultures prefer dining on skeletons of creatures no larger than a small sheep, they’ll eat larger bones as well, with a bit of preparation. Since the birds face no real competition for their meal after the meat has been picked off, they can take the time to fly larger bones into the air, then drop them onto rocks in order to break them into bite-sized pieces. They can eat at a more leisurely pace, and have even been known to return to unfinished skeletons days after their discovery, since nobody else wants their snacks.

A dryer diet also means the bearded vulture, who doesn’t really have much of a beard, does get to have some nice looking feathers on top of its head. It’s not unusual for a bird to have feathers, of course, but many other vultures have to have bald pates to cope with the sticky, gooey corpses they stick their heads into when they eat. Bones don’t make such a mess, but the bearded vulture makes up for this by rolling and rubbing in the dirt, possibly to impress each other, or possibly to fend off microbes.

If bearded vultures are indeed picky eaters, then their kids kind of get back at them. As lovely a meal as some dried rib cage may seem to the adult birds, their hatchlings still demand actual flesh, and so the parents will need to scavenge for fresher kills to keep their young fed. Fortunately for the adult vultures, this demand for a special dinner each night is just a phase, and as the birds mature they move on to their crunchier diet.