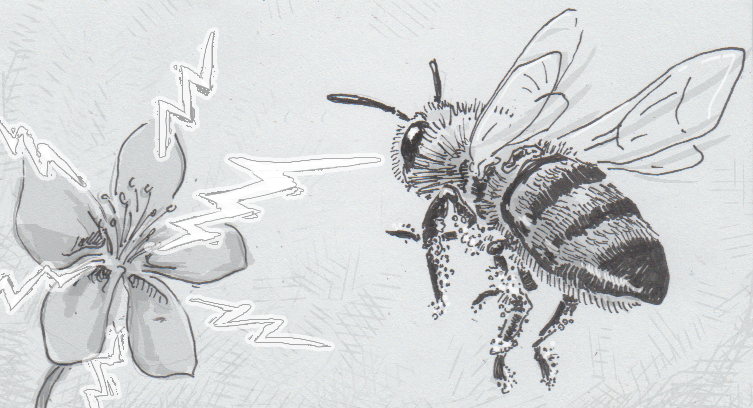 What makes a rose so lovely? The rich color of the petals? The delicate scent of the flower? The transmission of ions from your nose to the flower? You, you didn’t notice that last bit? Well, if you were a bee, that might be one of your favorite parts of a rose, aside from the nectar of course. In fact, bees not only detect flowers through their electric fields, they help them collect their lunch more efficiently as well.

While they’re too weak for humans to feel them, plants and other living things create electric fields as part of our cellular metabolism. These fields are detectable though, put to use in the water by sharks and electric eels, but only recently did we realize that bees could detect the charge of flowers. Rather than specialized anatomy dedicated to the task, they do it with the hairs covering their body, which is why this ability hasn’t been fully appreciated until recently. As the bee approaches a flower, the electric field of the flower makes the bee’s hairs move, like a more subtle version of the trick where you can lift your hair after building up a static charge with a balloon.

While the electric fields on flowers have been known for some time, bees reliance on these fields had yet to be proven until recently. To test this, scientists put bees in a lab with two kinds of visually identical, artificial flowers. One set of flowers then had tasty nectar, plus an electric charge, while the others were inert and filled with bitter liquid. The bees then had time to visit these flowers, possibly learning the association between the electric field and tastier food. The electric fields were then deactivated, and the bees suddenly started visiting the gross flowers again, indicating that they were previously being guided by the current tickling their hairs. Just to be sure of the mechanism driving all this, the researchers also confirmed with laser-measurements that the bees’ hairs do actually move in this process, and that the hairs connect to nerves that could signal the brain when they’ve been moved in this way.

Aside from making great use of fuzz that was already useful for picking up pollen, this dynamic helps the bees pick the best flower to go to. Over time, flowers build up a negative charge while bees in flight become positively charged. They equalize a bit when a bee finds a flower, which lets other bees detect how recently a flower has been visited. A flower that’s been visited has less of a charge, and is less likely to have enough nectar to warrant a visit. Bees can then be more efficient without even touching a petal, because it’s estimated that a flower’s charge can be felt as far as 10 inches away.

While this invisible flower-filtering capabilities has answered a bit about bees, researchers now want to examine other insects as well. If hair can be used as a sensor for electrical fields, it’s possible that many more species rely on them for some form of navigation.