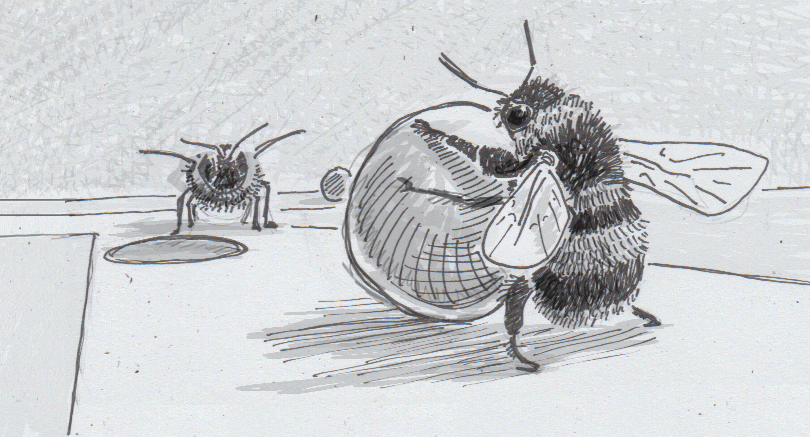 It’s probably thanks to the mindless lack of creativity implied in the terms ‘drone’ or ‘worker bee,’ but we’ve apparently been underestimating the mental flexibility of bumblebees. Or the motivational power of sugar water, one or the other. Either way, researchers from the Queen Mary University of London have manged to not only train bees, but also get them to train each other. Significantly, this training was to accomplish tasks that basically had nothing to do with the normal experience of being a bee, but that didn’t seem to phase the insects one bit.

The first step of the study was to train a group of buff-tailed bumblebees (Bombus terrestris) to carry a wooden ball, about the size of their own body, across a small arena and deposit it in a circle. Once at that circle, they would be rewarded for their effort with a few drops of sugar water, which seemed to be exciting enough prompt nearly perfect success rates. The fact that wrestling relatively large objects across the ground had no real analogs in a bee’s life didn’t seem to be an issue, and they took to the task quite readily.

A second group of bees were then introduced to the task, although their training procedures differed. Some watched a ball move itself thanks to hidden magnets, some were just presented with a ball in the final position, and others were able to watch three rounds of their trained peers accomplish the task from start to finish. As you might imagine, watching a fellow bee drag the ball around proved to be the most effective instructor, with their pupils catching on much faster than the other groups.

To complicate things further, the student bees were placed in a slightly different scenario than their teachers. The bees demonstrating the task were in an arena with three balls, each different distances from the goal circle. However, only the ball farthest from the circle could actually be moved in that trial, leaving those bees with lots of work. When their students were given a chance to show what they’d learned, all three balls were free to move. Scientists wanted to see if the student bees would simply mimic what they’d seen, even if it was more work, or if they’d be a bit more dynamic in their thinking. In most cases, the students picked the balls closer to the circle, saving themselves some trouble in the process. More importantly, they were also demonstrating a level of abstraction in their thought process— by moving a different ball, the bees must have realized that the ends were essentially more important than the means. As long as the goal was accomplished, there was flexibility in how the task should be done.

The idea that bees could influence each other isn’t too surprising, since they’re known to communicate with each other for certain tasks in their hives. However, the breath of information that was shared in these tasks, and the fact that those tasks were so unusual, was very significant. It may be yet another case of humans underestimating the cognitive abilities of ‘lesser’ animals. Or it might still just be that sugar water is the most amazing motivator in the world.