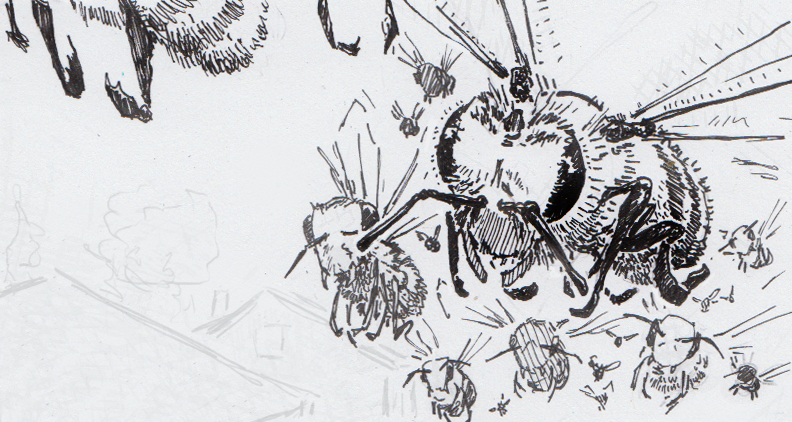 House hunting is often a stressful process, particularly if you’re a honeybee. While it’s generally over in just a couple days, failure in any regard can mean the collapse of an entire colony, so the right scouts, weather, and neighborhood are critical.

Like all moves, when a bee colony swarms they need to prepare for the transition in advance. With up to 60% of the current hive on the move, this can’t be done at the drop of a hat. And since bees aren’t known to carry suitcases or hire movers (who would just bang up their honeycombs anyway) they need to be ready to survive for a few days with no real shelter or food.

While worker bees fill their gullets to have calories to burn in the days to come, the queen bee does the opposite. Her attendants stop feeding her so she’ll stop laying eggs and slim down enough to be able to fly again, as an active queen is generally to heavy to relocate herself.

Finally, there is the matter of the remaining bees, which need a new queen. ‘Queen cups’ are built in the original hive, and filled with eggs to hatch new, virgin queens. Once these are completed, it’s time for the migrant bees to head out.

The next step is to move to a nearby location outside of the hive. This semi-sheltered area is used as a sort of staging area while scouts head out to find a new location. The scouts then return to the group to report their findings, via a sort of waggle dance. The more energetic dancing is seen as a stronger endorsement of a particular location, as the goal is to persuade the other scouts to evaluate and sign-on to that option. In this way, the scouts vote on locations in a couple of rounds of visits, until a final selection is made that the rest of the host will then travel to.

Note: This post was motivated by my son and I witnessing what was likely the second leg of a swarm heading over our porch. The noise of wings and the mass of insects was quite striking, although it appears that they weren’t planning on staying in the immediate neighborhood. High rents seem to be getting to everyone these days.