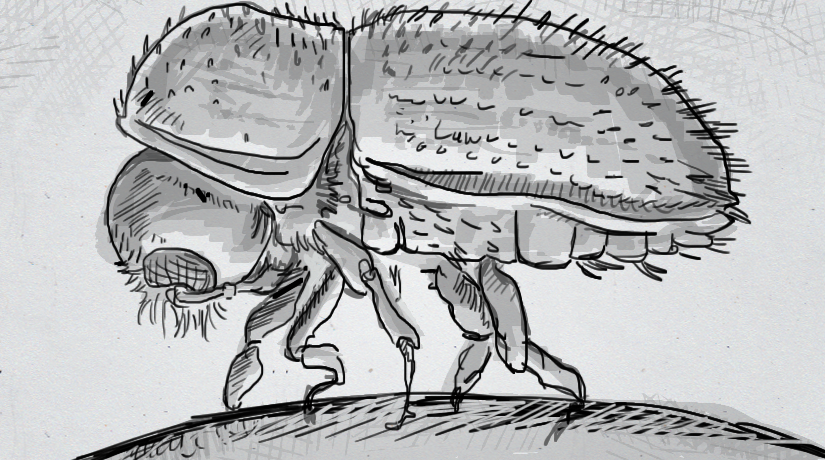 While the Coffee Berry Borer Beetle sounds like something from a Dr. Seuss book, they are far more nefarious than anything intended for children. They have been found on coffee plantations around the world, somehow bypassing the coffee berries’ natural defenses and destroying over 300 million dollars worth of coffee in Brazil alone. If that weren’t enough, it turns out that these coffee-corruptors aren’t working alone, as they rely on a sinister accomplice to devour this most precious of plants.

The berry borers, or Hypothenemus hampei, are small, black beetles up to 1.8 millimeters long. Their super-villianous power is that they can safely lay their eggs in coffee berries so that their larvae can eat the seeds when they hatch. This is very unusual, as the seeds are (delightfully!) loaded with caffeine, a substance that not only makes this website possible, but evolved to keep animals and insects from eating the berries in the first place. Caffeine’s bitter taste is usually enough to deter pests, but similar to the flavorful defenses of mustard plants, should be able to kill insects that would damage the plant. The berry borers somehow missed this, and can safely devour caffeine, seemingly causing it to vanish in their digestive tract without a trace.

As the beetles were studied, it was noted that no caffeine was ever found to pass through their system for discovery in their feces. Somehow they had found a way around the caffeine defense, and were metabolizing it entirely. This is when the beetle’s accomplice, Pseudomonas fulva, was unmasked. P. fulva is a species of bacteria that can live entirely on caffeine, and was the secret weapon in the berry borers’ guts that made their lifestyle possible. As the beetles ate the seeds, P. fulva defused the caffeine, leaving the beetles to safely enjoy the carbohydrate-laden coffee beans, which would normally be so difficult to digest they really should be starving on them. Wait, what?

In addition to allowing the them to ignore the toxicity of caffeine, bacteria granted another evil trick to the berry borers. A sequence of bacterial DNA was found in the beetles’ genes that produced a protein called mannanase. This protein is then used to break down the coffee’s carbohydrates, making this a viable diet for the beetle larvae. At this point, it makes sense to see the beetles as pawns in the bacteria’s evil schemes to make us cranky and tired all the time. This doesn’t make dealing with the problem much easier though.

While the caffeine-eating bacteria can be killed with antibiotics, it’s not practical or safe to dose the coffee plants in order to stop this cycle.  If the mannanase production could be disrupted instead, it could ruin the beetle-bacteria relationship without resorting to widespread drug application. Or maybe it’s time to sell some local predators on the joys of caffeinated beetles snacks each day. Give them some cream and sugar for the bitterness and it should be an easy sell.

Source: This Beetle is Ruining Your Coffee With the Help of Bacteria by Ed Yong, Not Exactly Rocket Science