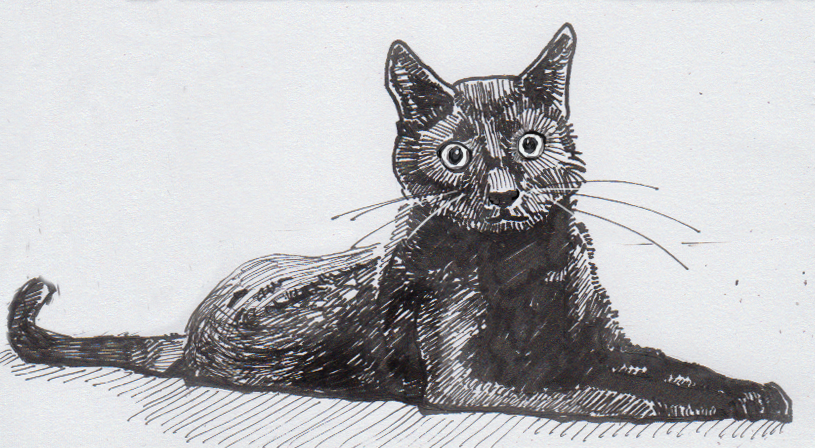 Beliefs in witches and luck color our concept of black cats

Humans have been getting along with house cats for around 9,000 years, but things took a turn for the worse when witches got involved. It wasn’t that the cats stopped catching mice near our grain or scratching up our furniture (wait…), but that people in Europe started assuming that cats, specifically black cats, were in league with, or possibly were, agents of the devil.

Even if this fear of felines was targeted only at a subset of cats, it was still a considerable hit their once exalted reputation. Cats in ancient Egypt had been exalted for their grace and poise 3000 years ago, but by the Middle Ages a craze over witches was ruining everything. Since a few supposed ‘witches’ may have been what we’d now refer to as crazy cat ladies, the cats were thought to be the witch’s familiars— agents she could control and communicate with to plot evil. If that wasn’t a big enough stretch, the other accusation was that black cats were actually the witches themselves. A folk story from 1500 tells of a boy injuring a cat’s left leg with a rock, followed shortly by the appearance of a suspected witch with a limp on her left leg.

If stories of transmogrifying witches wasn’t enough reason to worry about black cats, consider the legend of Sith. Sith was a Celtic fairy known for stealing the souls of the recently deceased before it they could collected by the gods. To do this, Sith would supposedly take on the form of a giant black cat, which, if you consider a panther arriving at a funeral, does sound a bit unnerving. Sith could somehow be blocked in his errand by sitting with the dead until they were buried though, which seems suspect considering how pushy most cats can be, even about something like a tummy rub or sleeping on the book you’re trying to read.

Fortunately for black cats around the world, not everyone has been preoccupied with witchcraft or fairies. Black cats are thought to bring suitors in Japan, and luck to brides in parts of England. In Germany, a black cat crossing your path from the left is good luck, but you may want to avoid the cats coming from your right. Fishermen in various cultures looked to black cats on their ships, and back home, for good luck. Pirates also liked having a black cat to sail with, maybe even beyond the fact that they might help with stowaway rodents.

While concern over a cat’s coloration may seem arbitrary, there have been real consequences to these fears. Cats, particularly the black ones, were killed in large numbers in the 14th century, as people tried to rid the world of the witchcraft that was supposedly the source of the plague epidemic. Today, we know that cats are likely to help keep plague-transporting rodents at bay, but black cats still seem to face a special stigma. Black cats get adopted from animal shelters at slower rates than other colors, for no obvious reason. To help level the playing field with tabbies and calicoes, Black Cat Appreciation Day (August 17 in the US, October 27 in the UK) tries to overcome the above superstitions and boost the cats’ profile a bit, hopefully finding a safe, demon-free home.

Source: Why is a Black Cat bad luck? by S.E. Schlosser, American Folklore