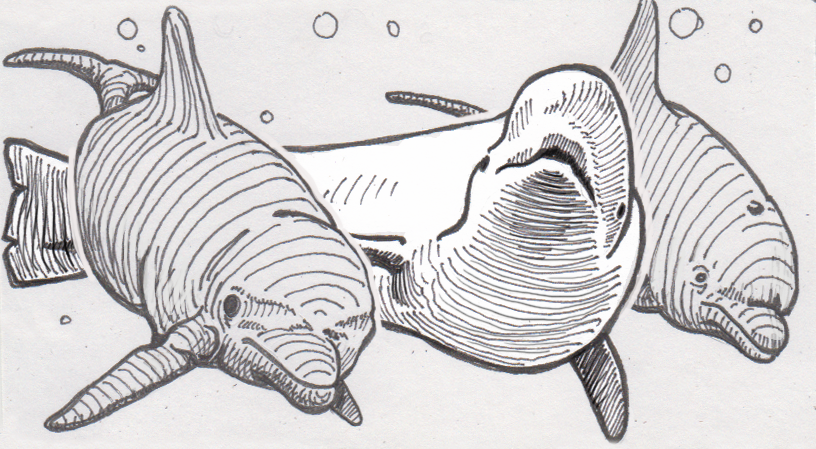 One of the best ways to learn a foreign language is to immersion, which may be why a beluga whale in Crimea has been picking up dolphin so quickly. The whale was moved into the Koktebel dolphinarium in 2013, suddenly finding herself with only bottlenose dolphins as companions. The dolphins were a bit frightened at first, but now the group, including a calf born in 2016, regularly swims next to their pale cousin. That transition may have been helped by the fact that the beluga has stopped calling out like a whale and now spends more of her time clicking and squeaking like a dolphin.

Sound for searching and socializing

Both dolphins and beluga whales rely on sound for multiple aspects of their lives. In social groups, both cetaceans will communicate with kin with a variety of squeaks and chirps. Less is known about beluga communication, but we have isolated specific noises that dolphins make to identify individuals they know, basically stating the name of that animal. Both species also navigate via echolocation, emitting high frequency clicks that are focused and boosted by a bulbous bit of anatomy called a melon. This fatty tissue sits atop their noses, and is the underlying reason for belugas bulging foreheads. That emphasis may also underlie beluga whales’ more sophisticated manipulation of sound, which we’re learning can go well beyond their usual assortment of squeaks and trills. All these sounds are created by pushing air through nasal cavities, meaning that they’re technically fancy ways to snort rather than a vocalization that involves the animal’s throat like humans use.

In 2012, a beluga whale named NOC was heard doing what was widely agreed to be an imitation of human speech as it sounds underwater. The whale had been in contact with human divers for years, and apparently decided that it was worth cultivating a good human impersonation, changing it’s normal rhythm and lowering its sounds by several octaves to better approximate human voices. While not a beluga, an orca was discovered off the coast of Canada that could make itself sound like an outboard motor boat engine. In that case, researchers believe that the young male had been separated from its pod at an early age, and so was latching on to other dominant sounds it encountered, possibly even attempting to communicate.

Communication would seem like a clear goal for our Crimean beluga. The assumption is that while she spent time calling for other beluga’s when first arriving at the dolphinarium, she’s now decided to embrace her new neighbors as a social outlet. When recorded two months after moving in with the dolphins, her squeaks and snorts had changed dramatically. She had given up the specific “contact calls” for other belugas, and instead was adding more squeaks and clicks to her daily chatter, including calls that the adult dolphins in the tank use to call out to each other.

Researchers regret that she wasn’t recorded sooner, as the earlier attempts at dolphin squeaks would have likely helped reveal exactly how the beluga approached learning another species’ sounds. We know that baby belugas start with a sort of babble before they can really “speak” like an adult, much like human babies take time to put phonemes in to recognizable words. That maturation process can take one to two years, and so this beluga’s two months of practice is an impressively short time to pick up a new set of sounds.

Source: Beluga Living with Dolphins Swaps Her Calls for Theirs by Elizabeth Preston, Inkfish