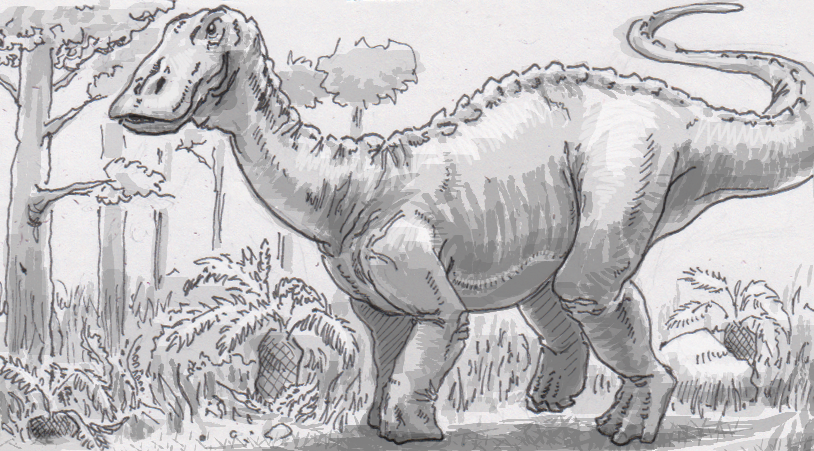 Sauropod dinosaurs, the long-necked herbivores that were the largest animals to ever walk on Earth, apparently got that big by padding their size a bit. They certainly grew thick, column-like legs to support bodies that in some species were as large as 77 tons, long necks and tails that stretched over 100 feet end-to-end, but they may have achieved those sizes thanks to a fair amount of hollow spaces inside their bulky bodies. These spaces were likely similar to the air sacs found in modern birds, and they raise a number of possibilities as to how these huge dinosaurs made use of them, since it’s safe to say they weren’t about to go airborne like your average sparrow or parrotlet.

Like the muscle and organs of any of these sauropods, we’ve never seen these air sacs “in the flesh,” because that flesh decomposed over 65 million years ago. We do have many sauropod bones though, and the vertebrae in particular bear strong structural similarities to the hollow bones found in modern birds. In a bird, sauropod or even pterosaur, hollow bones would be a way to keep a bone’s strength while decreasing its weight, something no animal would likely complain about. Since birds are part of the dinosaur lineage, this isn’t shocking, but it wasn’t a given since sauropods would be one of a modern bird’s more distant relatives when compared to a two-legged theropod or even other four-legged herbivores. That said, researchers are seeing that these hollowed out bones not only lightened the load for big bodies, but they also look like they had attachment points for organs called air sacs, which offer an array of uses to a massive dinosaur.

In modern birds, air sacs primarily facilitate very efficient breathing. In something like a chicken, there are sacs in the front and back of the body, attached to the spine, and they allow air to continuously circulate for constant respiration, versus the discreet inhalation and exhalation humans and mammals use. This is great for a bird that needs to be flying a lot and burning a lot of energy in the process, but for massive and presumably less-active herbivore, was this kind of respiration really necessary? These huge dinosaurs likely required a lot of food already, and a very active metabolism would have only made things trickier.

Fortunately for our inflated sauropods, air sacs don’t require a “red-hot” metabolism, and may have actually provided some options for cooling a body as well. On one hand, being lighter meant that a big sauropod would have had to work less to move its body, generating less metabolic heat in the process. Additionally, the constant respiration of birds’ air sacs also allow them to effectively dump heat through their breath, exhaling warmed air like a swamp cooler. The combination may have been a compelling advantage to these big dinosaurs, even if they never needed to worry about sprinting or flapping wings.

The most extreme example of a sac-filled sauropod to date is Katepensaurus goicoecheai, a largish rebbachisaurid from South America. Katepensaurus lived in the Cretaceous period, after the heyday of most sauropod species.The climate at that time was especially warm, and so there is speculation that the unusual number of air sacs found in Katepensurus‘ vertebrae may have been an adaption to help the dinosaur beat the heat while being big. However, other sauropods living around the same time don’t turn up with the same specializations, hinting that the heat may not have been a widespread problem. In which case, maybe this sauropod was just looking to be as light and nimble for a good run? As with many things surrounding dinosaurs, the answer may have to wait until more fossils can be found.