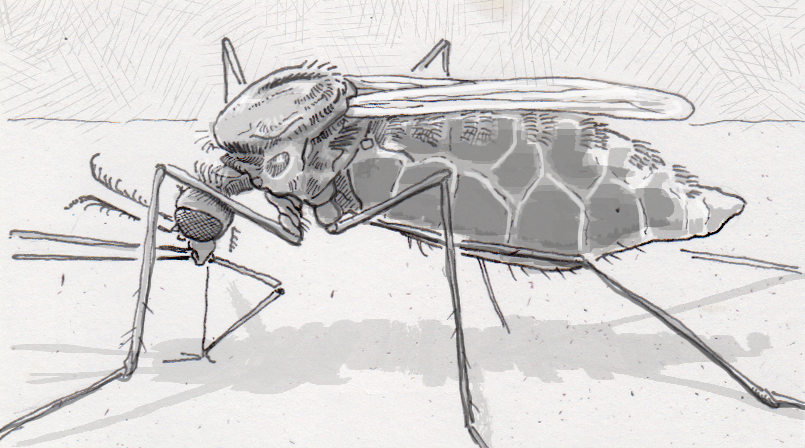 Beyond growing eggs, mosquitoes drink blood to deal with dehydration

Call me crazy, but fresh blood doesn’t sound like a refreshing beverage. Sure, plasma is mostly water, but blood sucked from the source is going to be piping hot. Still, drinking blood is apparently an attractive notion to thirsty, female mosquitoes. This realization is a bit of a surprise, since females usually collect blood to grow their eggs, going as far as ejecting the water content of blood to make more room for nutritious protein in their stomach. Nobody thought these insects had any interest in sipping blood for other purposes, which helps explain how researchers stumbled upon the mosquitoes’ thirst by accident.

Using blood as a beverage

Mosquitoes were being transported through a lab, when a batch of slightly dehydrated females escaped from a vial. Researchers noticed that they were particularly aggressive in their attempts to bite the people in the lab, which didn’t match their expected behavior. Since mosquitoes lay their eggs in water, the assumption was that mosquitoes without access to water wouldn’t attempt to lay eggs, and thus not need protein from anyone’s blood. Why risk being swatted for a resource that wasn’t really needed?

A larger experiment was then launched to see if the dehydration was driving the mosquitoes’ aggression, rather than dampening it. When allowed to fly more freely with access to chicken blood in a simulated animal, dehydrated mosquitoes were found to be much thirstier than usual. As many as 30 percent of parched females made an effort to drink blood, versus the 5 to 10 percent of females that would usually stop for a sanguine snack. In line with the thirst hypothesis, higher temperatures seemed to drive the mosquitoes to drink more blood, apparently without any higher chances of reproduction.

Providing an answer to other questions

This behavior was surprise, but it actually helps explain otherwise confusing patterns in the spread of mosquito-borne pathogens like the Zika virus or malaria. Infection rates go up when mosquitoes are breeding, but they were also known to go up during droughts. This spike in blood-sucking now makes sense, since the mosquitoes were probably using people’s blood as a substitute for depleted water and nectar supplies. Knowing this may help in the planning of disease prevention, since we can now predict mosquito activity related to these dry weather conditions.

Source: Mosquitoes bite not just to lay eggs but also to quench their thirst during drought, study found by Michael Miller, Phys.org