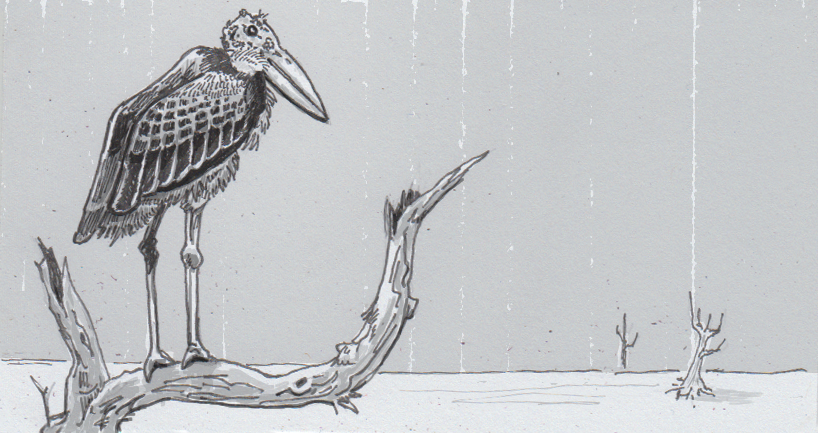 If you’ve ever complained about feeling smelly and sweaty on a hot day, it may help to put some things in perspective. Even if you’ve forgotten your deodorant that day, your sweat is probably a tidier way to cool off compared to what some animals have to go through. For some birds, cooling down involves purposely soiling themselves to beat the heat. Other birds take things much, much further, as their poop has been found to help cool entire regions, not just their own legs.

Marabou storks (Leptoptilos crumenifer) are African wading birds a notably large beak and skinny legs that help prop them reach heights of up to five-feet tall. While these birds will happily stomp through swampy wetlands, they also have to content with the dry, hot weather of the southern Africa, which is where the urohydrosis comes in. Urohydrosis basically means that the storks, as well as a few other bird species, poop on their legs on purpose. Because bird poop is mixed with pee before being expelled out of a single orifice called a cloaca, this results in a lot of runny liquid covering the legs. As that liquid evaporates, it cools the bird’s legs, much like our sweat helps cool our skin. It also adds a preventative measure our sweat doesn’t, since as the dribbled waste dries, it leaves behind the white powdery solids of the waste, which can then reflect sunlight and keep the legs from getting quite so hot in the first place.

Seabird poop in the Arctic also helps keep them cool, but on a much bigger scale. Various puffins, turns and murres and more are pooping all over the Arctic, not just on their legs, and that poop becomes food for bacteria. As those bacteria feed, one of their waste products is an estimated 44,092 tons of ammonia, which apparently smells bad enough to make even urohidrosis sound like a pleasant idea. That ammonia reacts with environmental sulfuric acid and water, forming tiny droplets in the atmosphere.

Smaller droplets that form clouds have more surface area, and thus scatter more incoming sunlight than fewer larger droplets would, and so the clouds that start with bird poop are more effective heat shields than would otherwise be found. In the summertime, these poop-seeded clouds probably account for about half a watt of cooling per square yard of space. It’s not enough to say, undo the 150 watts of energy being collected by greenhouse gasses around the world, but it’s a big enough difference that bird poop should probably be part of future climate models.