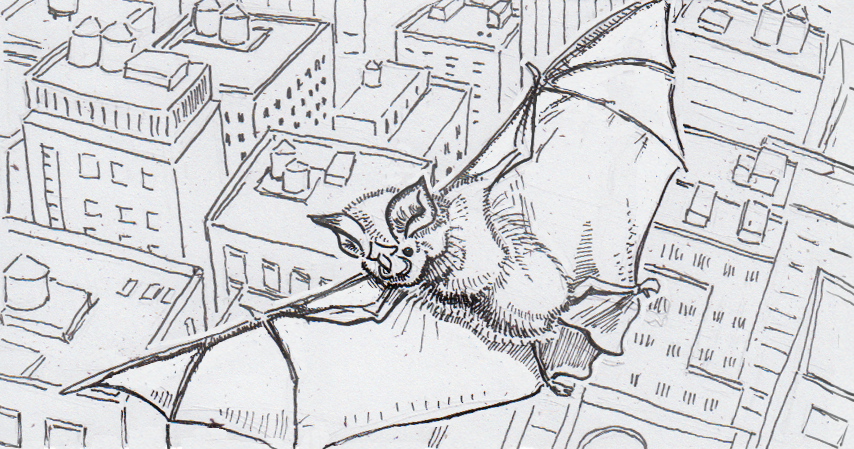 Birds, frogs, crickets and bats battle the clatter and commotion of the city

It’s no accident that the countryside has a reputation for peace and quiet. Even though a healthy forest can have plenty of insect and bird chatter, it can’t compare to the amount of sound echoing down a major city’s cement and glass corridors. New York City’s Times Square can be as loud as an ambulance siren, even with no emergencies in the area. Restaurants in Boston are a bit louder than a lawnmower, and San Francisco’s indoor Westfield Mall can outdo a blender. For humans, this can be detrimental and annoying, but at least we can send a text message when it’s too loud to talk. For various animals trying to get by near a city, the never-ending urban din are likely hurting their chances of finding a suitable mate, or even their next meal.

Not all noises are equal though, and the specific pitch of each sound is critical to animals living in urban environments. While ears can pick up a range of sounds, most species have evolved to have a few “sweet spots” that they’re particularly tuned into for communication or navigation. For example, adult human speech usually falls between 85 to 255 Hz, safely within our hearing range of 20 Hz to 20,000 kHz. If a sound is higher or lower than our speech, it’s easier to tell the sources apart and hear the person you’re talking to. If multiple sounds are competing for the same frequency range, things get garbled more easily.

Unfortunately for many male birds, crickets and frogs, traffic from cars shares the same pitch as their mating calls, between 1 to 10 kHz. Since your average bird isn’t going to out-shout a car or bus, wildlife seems to be shifting their vocal range to talk around this noise. Frogs near a city were five percent squeakier than their country cousins, and crickets may be adjusting by 4 percent. This pitch-shifting may help them be heard, but they likely don’t sound as good to their audience. Most females prefer lower-pitched voices in males, and so this might be making finding Mr. Right harder. The worst case scenario is that birth rates decline as animals can’t make “informed” decisions about their local dating pool.

Shouting over or around the city

For echolocating bats, the problems presented by a noisy city are even more immediate. Navigating through reflected sound in a noisy space can be the equivalent of having a light shined in your eyes, making it hard to tell what’s right in front of you. Bats like the greater horseshoe bat (Rhinolophus ferrumequinum) trying to hunt via echolocation have been found to get louder when their preferred pitch was being used in their local environment. If a wider range of noise was present, the bats would react by making their own squeaks higher to avoid having their sounds washed out.

Gleaning bats like the greater mouse-eared bat (Myotis myotis) use their echolocation to navigate, but not to hunt. Instead, they rely on just being good listeners, picking up on the rustling leaves or natural clicks made by their prey. Without being able to control those pitches to work around a loud cityscape, these bats are only able to try and avoid ambient noise or eat less. Noisy conditions was found to make the bats’ evening foraging two to three times less effective.

Fortunately for all these birds, frogs, bats and humans, there are ways to reduce the noise. Noise-blocking walls are effective when installed near large roads or power-plants. Some trains may be difficult to quiet thanks to their design, but the rise of electric vehicles promises more soothing cities as well. If we’re lucky we’ll even be able to hear some chirping and croaking again.

Source: Bothered by Noise? Try Being a Bat by Mary Bates, Nautilus