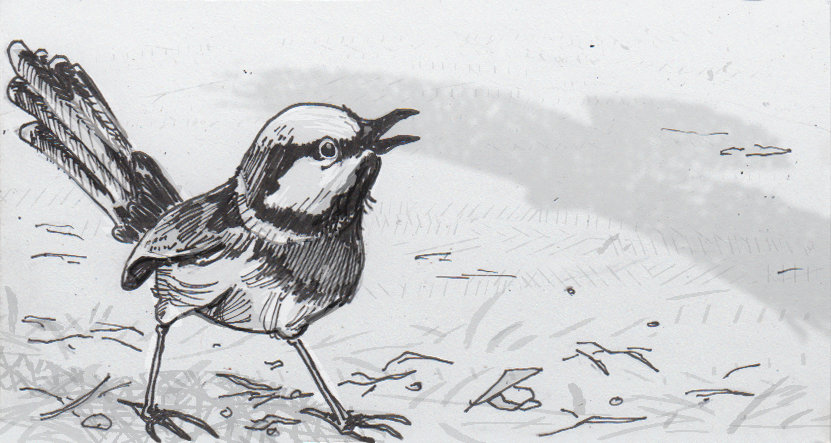 When the kids on our street are playing outside, one or more parents will be out with them to supervise and keep watch for approaching vehicles. With a quick shout of “car!” all the kids have learned to scatter out of the way to avoid danger. Based on recent research, if any birds were regularly in the vicinity, they would likely learn to recognize our alarm call and get to safety as well.

Counting on the community

Many animals use alarm calls to alert their kin that danger, more often a predator than a mail truck, is approaching. Animals can dependably react to calls from their own species, but evidence has been growing that they can learn the alarm calls of other species as well. They wouldn’t automatically recognize them, but if they lived in the same region, they seemed to know when their neighbors noticed danger.

To confirm this, superb fairy-wrens were isolated in two groups. On the first day, both groups were made to listen to unknown alarm calls, either from a thornbill or one created by the researchers. The wrens didn’t seem to care much either way, as these were just sounds without any meaning attached to them. On the second day, one group continued to just hear sounds, while the other group witnessed a fake predator arriving just after a sound would play. On the third day, only sounds were played, but the group that had had the predator paired with the sound on the previous day continued to react as if danger was near. The sound had been attached to the overall experience of the approach of a predator, even if carried no inherent meaning to the wrens previously.

While not a huge surprise, confirming that these animals can learn from these experiences may prove quite useful. When baby animals born in captivity are first released, or animals are relocated to a new region, it may help their odds of survival if we can better prepare them for the environment they’ll be living in. It would be a quick investment to teach some baby numbats what their future neighbors sound like when a predator approaches so they’re ready to hit the ground running.