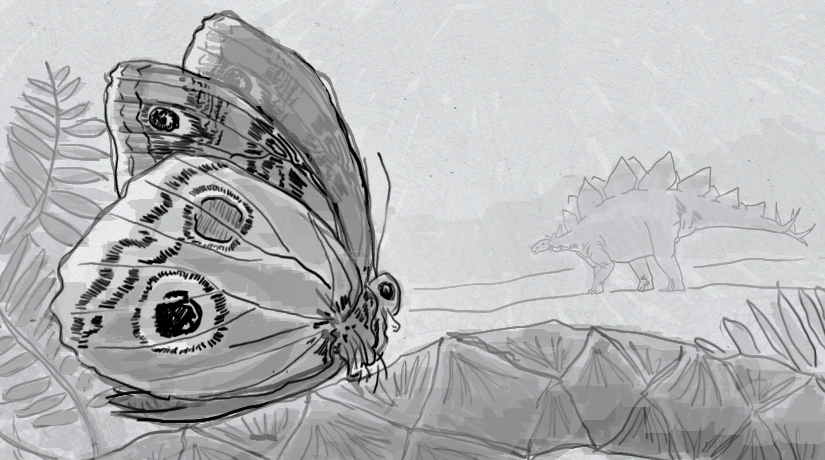 The rise and fall of evolution’s first shot at butterflies

Apparently the evolutionary formula for butterflies is one part flying insect plus one part nectar-containing plant structure. That plant should ideally reproduce sexually, hiding pollen alongside any tasty nectar. It might take a few million years and might not include that fun caterpillar routine, but this appears to be all the environmental pressures necessary to produce an insect with a nectar-sucking proboscis, a narrow body and wide, scaled wings, complete with eye-spots. Basically, a butterfly! …that’s really a lacewing.

These faux-butterflies, known as kalligrammatid lacewings, date back to the Jurassic period, flying alongside dinosaurs like Stegosaurus and Brachiosaurus 125 million years ago. Earlier species more closely resembled modern lacewings, with more almond-shaped, transparent wings and split mouth parts intended for biting and chewing. Over time, they kalligrammatids evolved to look much more like a modern member of Lepidoptera, with wider wings decorated with colored scales and pigmented eye-spots, as well as fused mouth parts that acted like a proboscis. They even evolved pumping mechanisms and specialized lengths and widths to their probosci, allowing different species to focus on different sources of nectar. While these insects were functionally very similar to a modern Monarch or swallowtail, they were missing a key component of a butterfly’s life: flowers.

Flowers didn’t exist in the Jurassic when kalligrammatids first started specializing in eye-catching nectar collecting. Instead, they likely found their food in cycads, Caytonialeans or Bennettitaleans. These woody plants with fern-like leaves all produced seeds in protective cones, and would have required some kind of pollen transfer for fertilization. Their pollen was produced deep in these cones inside “pollination droplets,” which is the nectar that would motivate kalligrammatids to pay a visit and further the plants’ reproductive cycles, similar to how bees and butterflies work with flowers today.

The fossil record shows this ecosystem working well for around 40 million years, before being disrupted not by modern butterflies, but modern flowers. The flowers started taking over the niche previously occupied by Bennittitaleans plants, which then took the kalligrammatids lacewings with them, since the lacewings were such specialized feeders at that point. Modern butterflies in Lepidoptera then evolved to be the mutualistic feeders for flowers in what could be considered an extreme case of convergent evolution. Modern butterflies are actually the second iteration of insects evolving to serve the reproductive needs of nectar-producing plants.

Source: Butterflies in the Time of Dinosaurs, With Nary a Flower in Sight by Jennifer Frazer, The Artful Amoeba