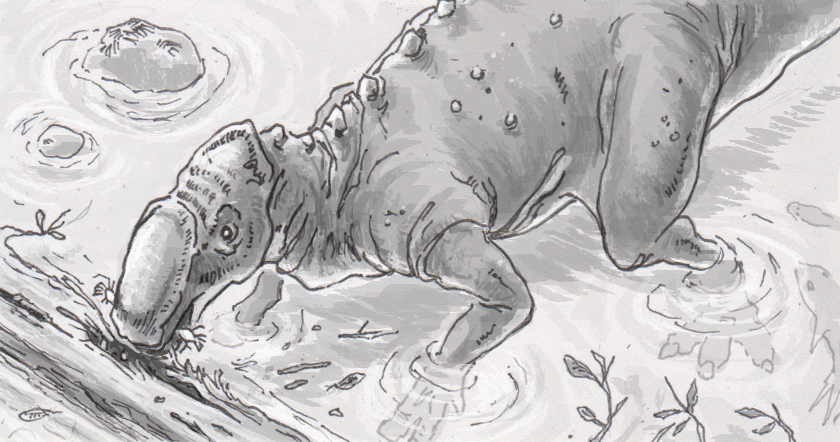 Oh dear. Just what have the hadrosaurs been eating? Based on the shape of their teeth and jaw structure, it’s a safe bet to say that hadrosaurs were herbivores. Chewing and grinding up tough plants would have been no problem for these multi-ton dinosaurs, but that doesn’t mean that they only ate greens. Close examination of coprolites, or fossilized poop, from hadrosaur territory suggests that between huge helpings of salad, creatures like Gryposaurus or may have also stopped to snack on less-leafy fare, like rotting logs and even small crustaceans. Nobody is about to reclassify hadrosaurs as omnivores at this point, but the contents of this poop has raised questions about what motivated these meals, and how frequently they occurred.

More than a single serving

The coprolites in question come primarily from Utah. Before any crustaceans were detected, the poop caught paleontologists attention thanks to an unusual amount of wood that had been eaten. Analysis of the wood found that it was most likely from rotting logs, complete with traces of fungi from millions of years ago. The wood was consistent with other coprolites attributed to Maiasaura hadrosaurs from an earlier dig in Montana. There are scenarios where cows have been found to eat rotting logs with some gusto, providing a chronologically-reversed bit of precedent for herbivores eating material that’s not generally digestible.

The coprolites from Utah of course held even more treasures, with pieces of crustacean shells turning up in 10 of the fossilized feces. The fact that those feces were found in three rock layers across a 13 mile range, alongside the excreted wood, strongly suggested that there was a larger pattern, rather than a fluke case of a bug being caught in a Gryposaurus‘ lunch. The pieces of shell were thin and broken, indicating that they had been eaten and embedded in the poop, rather than being fossilized on top of it later on. While a specific shell-holder hasn’t been identified, bits of claw indicated that the hadrosaurs were eating something like a crayfish or crab, as opposed to an insect or other shelled animal.

Packed with calcium and protein

So with all this evidence that hadrosaurs were eating meals of crayfish over rotten log, we have to of course ask what would motivate this behavior. Paleontologist Karen Chin points out that the largest specimen was around two inches in length, which would have been big enough for a hadrosaur to notice and spit out if it was undesirable. When coupled how often these critters turn up in hadrosaur poop, it stands to reason that the hadrosaurs were purposely eating these crustaceans. Looking again to modern animals, birds are known to eat extra protein to prepare for producing offspring and eggs, which these crustaceans would have provided. Mammalian herbivores are also known to dabble in a bit of bone-munching from time to time, again as a form of nutritional supplements. Assuming these modern animals can be used as models, the hadrosaurs probably dug into into soggy logs to get some extra protein and calcium before mating season.

Other researchers caution about attributing motivation when all you have to work off are fossilized poop, or even fossilized skeletons. While the crustaceans were in some cases large enough to be detectable, it doesn’t mean the hadrosaurs were seeking them out. Wood and exoskeletons also fossilize more easily than softer plants, and so we can’t be sure of how representative these ten poops are of a larger trend. They could be rarer than the fossil record suggests, and not as applicable to hadrosaurs as a group, much less all herbivorous dinosaurs. That said, they don’t have to be a stable of dinosaur diets to be relevant, since not every expectant mother faces cravings and nutritional deficiencies either. With the amount of variation in diets and individual metabolisms we see in organisms today, it might actually be weirder if hadrosaurs never ate a crayfish or bug at any point in history.