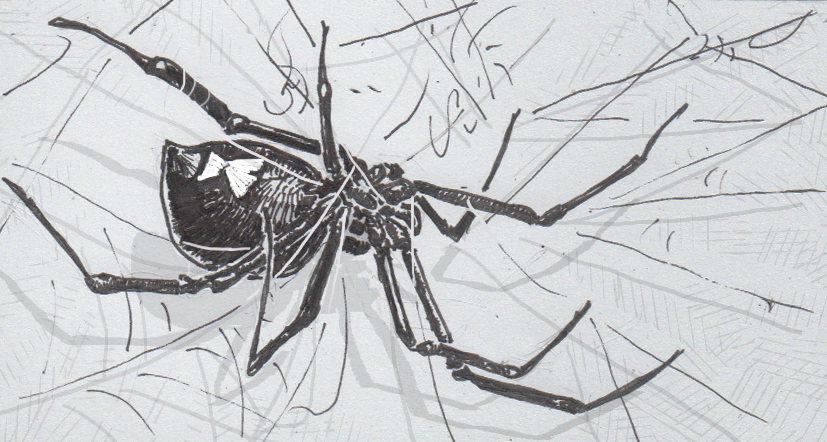 Black widows are selectively stealthy with their scarlet stomachs

It seems like it should be hard to be obvious and sneaky at the same time, but black widow spiders show that it may just be a matter of catering to your audiences. What’s eye-catching to say, a would-be predator can still be overlooked by the prey the spider would like to surprise with its web. With black widows sporting red hourglass-shaped markings on their bellies, the question wasn’t about what the warning to predators was, but why didn’t the prey see it?

The hourglass on black widows (Latrodectus mactans) was assumed to be a case of aposematism, or warning coloration. By flashing the bright marking, the spiders advertise that their body carries toxins most predators, in this case birds, would rather avoid. Nature seems to have settled on this meaning for bright colors, with examples ranging from monarch butterflies (Danaus plexippus) to coral snakes (Micrurus fulvius), but scientists at Duke University studying black widows wanted to confirm that the red hourglass truly functioned this way. To do this, they placed fake spiders by bird feeders, either with painted red markings or all black. They kept track of birds reactions, and found that the signature hourglass did startle birds away from the fake arachnids.

Researchers then looked at the specific red found on a black widow’s body. They found that while it was bright and easily viewable by birds (and humans), the exact wavelength of red may have presented problems to insects. While reds are not invisible to insects, they don’t have the same photoreceptors in their eyes as birds or mammals, and thus see a more limited range of reds hues. As such, the hourglass on a black widow is likely much more subtle and less likely to draw the attention of a cricket or ant.

To be extra safe, black widows seem to arrange themselves in their webs to optimize these effects. They generally hang underneath their horizontal webs, giving birds above a great view of their markings. At the same time, this minimizes the red’s visibility from the ground, presumably making it completely out of site for most bugs. The combined effect shows that coloration may have evolved not only in response to pressure from predators, but also from the prey in somewhat equal measure.

Source: Black widows are color-coded to deter predators without tipping off prey by Robin Smith, Scienmag