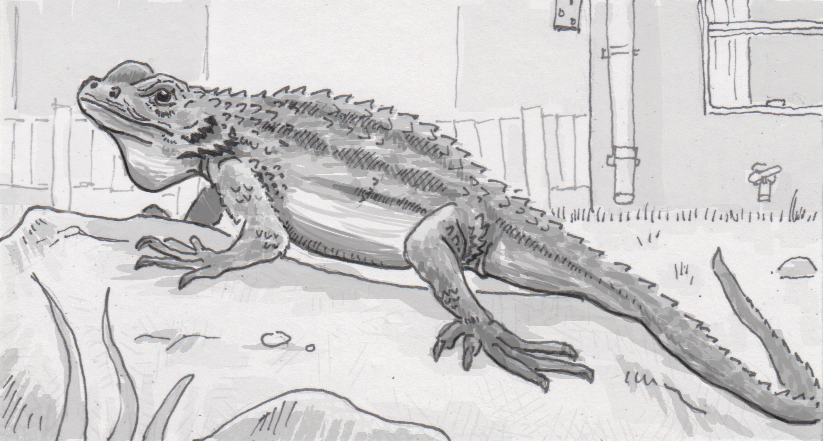 Like a western fence lizard, my third grader’s favorite color is blue. Unlike the lizards, seeing other colors isn’t exactly threatening to her, which is nice because we live in a pretty colorful world, and can’t run away every time we see something red or yellow. For the lizards, however, these preferences make sense beyond having a finicky sense of fashion, because colors can sometimes be a matter of life and death. Just ask the researchers that risked their safety discovering these preferences.

Western fence lizards (Sceloporus occidentalis) live all over the western United States, including in cities like Los Angeles. This makes them both convenient and difficult to study; they’re close to research centers like the Natural History Museum of Los Angeles, but that also means they’re right around people’s houses and yards. So to find the eight-inch lizards, researchers end up studying people’s walls with flashlights, which is understandably confusing to anyone unaware of the bug-eating reptiles they share a home with. After researchers had too many encounters with police and even a gun-wielding home owner, the museum stepped in with some bright orange shirts with a large, official logo to give the lizard-hunting herpetologists a bit of legitimacy.

The problem was that while the orange made it clear researchers weren’t sneaking around to other humans, it also tipped off the lizards in big way. Bree Putman even ran experiments with lizards to see how they reacted to different colors, and reds and grays were definitely problematic. A red shirt would send lizards running at half the distance a blue shirt would, which Putman thinks is no accident. Western fence lizards have blue patches on their stomachs as a sexual display to attract mates, making it a positive cue in to the lizards. Red, on the other hand, is probably a good match for the feathers on lizard-eating birds, and so they’ve learned to stay away from crimson clothing.

This wouldn’t be the first time an animal has indicated a preferred color. Birds with red plumage seem to favor people in red or orange shirts. They probably don’t think the person is a potential peer, but the red is at least not seen as a threat in the bird’s eyes. These preferences weren’t enough of a concern to modify the dress-code specified by the Natural History Museum though, as the safety of the researchers was considered more important than level of alarm in the lizards.

My third grader asked: So is this like bulls that don’t like red? Although I read that that’s not really true?

Despite what cartoons have taught us over the years, no, bulls have nothing against the color red. In fact, they don’t even know what red is, since like most mammals they’re effectively red-green colorblind. The famous agitation for a matador’s red cape displayed by a bull in a bullfight is actually due to the cape’s movement, not the color. The main problem a bull has with the cape being red is that it hides the animal’s blood from the crowd as it nears it’s end in a traditional bullfight.