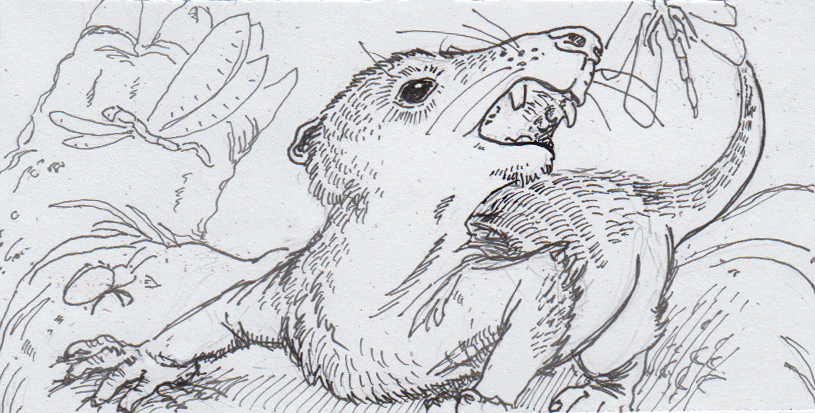 Bonacynodon schultzi and the transition to modern mammals’ jaws and teeth

Mammals may have had to live in the shadow of the dinosaurs throughout the Mesozoic era, but we basically had the whole ‘mammal’ thing figured out pretty early on. Creatures like the recently described Bonacynodon schultzi probably had mammalia’s trademark fur, whiskers and fleshy nose and overall fuzzy look as far back as 235 million years ago, all without actually being a mammal themselves. It’s thought that this distant relative likely laid eggs, but modern monotremes like the platypus do that, so live birth certainly isn’t a requirement to be part of the family (well, technically class.) The key bit of evolution that B. schultzi lacked was in it’s jaw. Or ears? Or both.

B. schultzi was found in Brazil among various other Triassic period animals, including a much larger herbivore named Dinodontosaurus. Fossils of the former were actually recovered wrapped around the leg of the latter, and paleontologists suspect B. schultzi may have been eating bugs off of a decomposing Dinodontosaurus, since our distant relative’s teeth were suited more for munching invertebrates than the flesh of  seven-foot-long creatures that looked like a cross between a bear and some kind of tusked-hippo.

What an interesting jaw you have…

B. schultzi’s teeth and jaw are actually what places it so close to our own lineage, without being an exact fit. Instead of a mouth full of somewhat uniform teeth, B. schultzi had a few different types of teeth, in the same way that you have molars, incisors and canines. These chompers look a lot like modern mammals, but the jaw bone itself wasn’t quite there. Vertebrates like reptiles have a few pieces to their lower jaw bone, with a few smaller segments called post-dentry bones at the joint where it attaches to the skull. Mammals, on the other hand, have one single mandible that connects directly to the skull. B. schultzi seems to be a great example of this anatomical transition, with post-dentry bones still present, but with thinner, reduced proportions.

…all the better to hear you with

So where did those post-dentry bones go? It might seem like the tinier versions of these bones were simply being eliminated over time when looking at a stem-mammal like B. schultzi. Instead, those bones were being thinned out and reduced before being moved to our ears. Known now as the ossicles, they now make up the smallest bones in our body, assisting with our hearing. Even before they were repurposed in this way, they may have been helping some of our ancestors with their hearing as well. Thinner post-dentry bones found in other transitional mammals like Liaoconodon hui may have helped these animal detect higher-pitched sounds. This would have been great for catching buzzing bugs, even if they were still situated in the jaw.