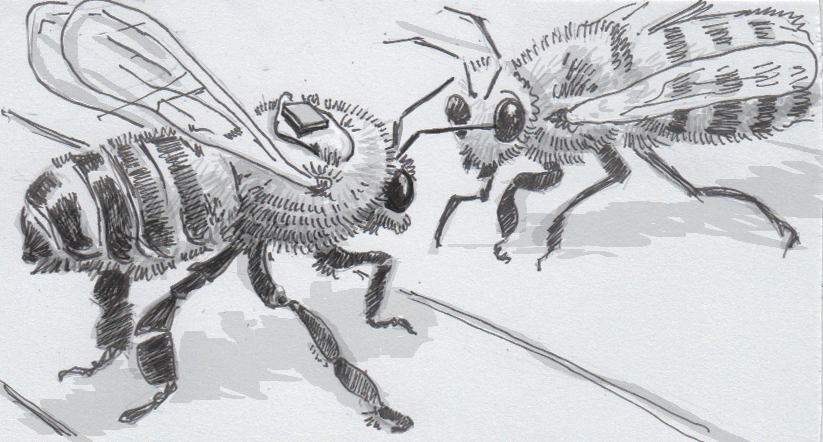 What sound do you think you’d make if someone ran into your head? Would “ouch” or “hey!” suffice, or would you need to dig a bit deeper into your vocabulary to serve up something a bit more emotive? Either way, you probably wouldn’t make any sounds as short and almost electronic sounding as the small whoops recorded from startled bees. After puzzling scientists since the 1950s, researchers from Nottingham Trent University think that bees make quick little “whoop whoop” sounds each time they’re caught off guard as a sort of catch-all exclamation.

Like the buzzing sound most of us associate with bees, these tiny sounds are made by vibrating wings at a specific frequency. The sound is inaudible to humans, but researchers have been detecting them for years, after putting microphones and accelerometers onto bees. In the hive, the bees were noted to make the small whoops while communicating about places where to move the hive or find food. Other bees that seemed to be observing the communicative movements would sometimes head-butt the performer, at which point equipment would register the tiny whoop sound.

Further observations have created some doubts about this explanation. The whoops were more often heard at night, even though the persuasive dances usually happen during daylight. They’re also made so frequently that they seem less likely to be part of a specific, targeted conversation about relocation or food sources. Finally, researchers found that you can get most of the hive to whoop at once if you give the whole structure a good thump.

So if bees that aren’t likely be watching a peer, but might be bumbling (ahem) around in the dark make these whoops more often, it seems likely that the small sounds are just simple exclamations over experiencing a collision. It might simply be the bees’ way of saying ‘hey! I hit something!” which seems to happen a lot in a crowded hive. Current observations can’t always make it clear which bee is making the sounds, but the fact that bumping the hive elicits a collective “whoop whoop” points to the bonkee making the noise, rather than the “bonker.” In either case, there’s a chance these sounds could help us measure the stress levels of a particular colony since startled sounds rarely correlate with happy, relaxed animals.

Source: Honeybees let out a ‘whoop’ when they bump into each other by Sam Wong, New Scientist