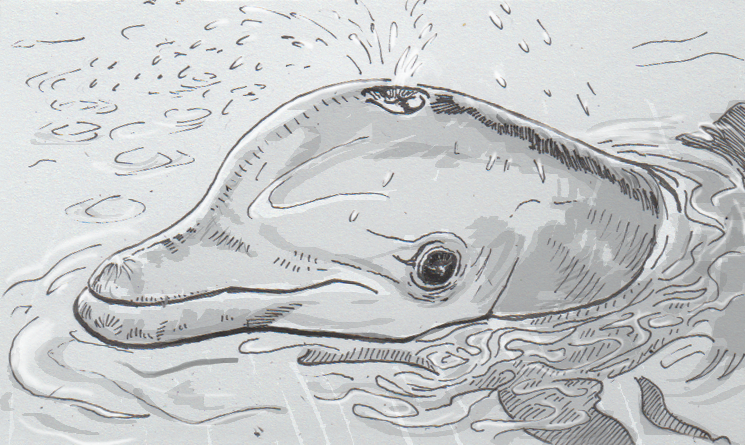 Boogers are a likely component to dolphin clicks and squeaks

I can snap my fingers and cluck my tongue, but I can’t really click my nose, especially not in any way I’d hope to communicate with. Dolphins can do this though, forcing air through their nasal passages beneath their blowholes past lumps of inflatable sacs called dorsal bursae. These bursae’s movement shapes the air, much like your vocal cords move to let you speak. While we have this generalized model for dolphin vocalization, it’s been very hard to figure out the specifics of how this activity creates the clicks, chirps and squeaks these animals communicate with.

Since direct observation is still a bit impractical in nasal passages vibrating at 1000 times per second, researchers from the Scripps Institution of Oceanography tried to recreate the sounds without an actual dolphin. Based on the similarities to human vocal cords, a simulation was created to try to reverse engineer a dolphin’s clicks, which consist of an initial thump or snap, followed by extended reverberation. It seemed that the bursae slamming together then quickly moving apart was the source of the initial percussive sound, but something was missing from the equation.

The final element was tied to the fact that a dolphin’s blowhole is basically a specialized nose. As such, the nasal passages where the bursae do their work is lined with a supply of mucus, and that mucus is what allows the bursae to sound when they move apart from each other. The mucus is said to behave a bit like silly putty, stretching when moving slowly, but snapping with report when moved abruptly. So as bursae move together, the mucus joins just long enough to be snapped apart when the bursae separate.

The researchers caution that a working simulation doesn’t prove that this is how dolphins are actually clicking, only that this is a (likely) possibility for how they might do it. While more direct evidence is needed to verify the simulation, it matches very closely with observed sounds from actual dolphins, right up to higher frequency sounds that couldn’t be done without the tackiness of mucus.