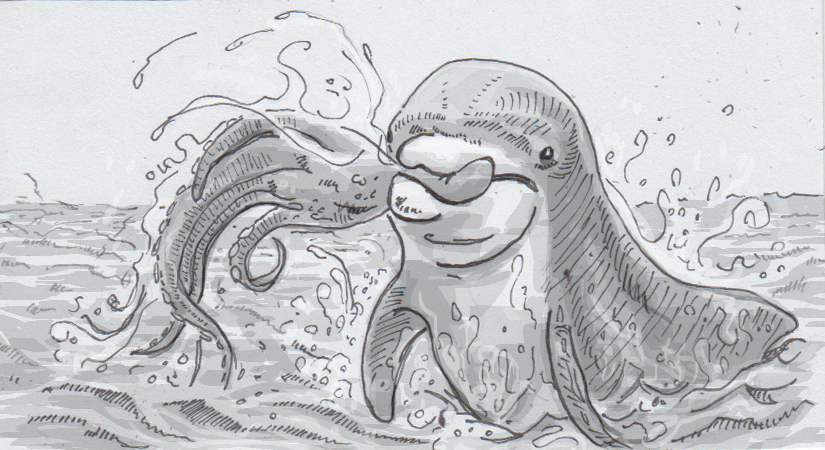 There are times when playing with your food is not only the social norm, but also potentially life-saving. Hopefully those moments aren’t happening at your dinner table too often, but for bottlenose dolphins off the coast of Australia it’s a fairly regular scenario in the winter and spring, when octopus is most likely to be on the menu. The catch is that octopus is a food that can fight back, in some cases even after the dolphin has eaten it. Or most of it.

Despite being spineless, an Maori octopus (Macroctopus maorum) isn’t the kind of creature to back down from a fight, even against a dolphin that’s at least 12 times its size. Rather than allow itself to be swallowed, an octopus can try to take advantage of the dolphin’s smooth skin, which is a perfect surface for the octopus to attach its many suckers that line its tentacles. The grip can be so strong that even if the dolphin succeeds in ingesting most of the resistant cephalopod, some tentacles might remain stuck to the dolphins face and mouth. Swimming with tentacles lodged in your throat is about as pleasant as it sounds, and is thought to be tied to some dolphins’ deaths, based on the state of their corpses found on shore.

The bottlenose dolphins (Tursiops truncatus) have realized that they don’t have to give up on eating octopus though. As some of the most creative hunters in the world, bottlenose dolphins already invent ways to improve their predatory capabilities. In the case of using sea sponges to scour the ocean floor for crustaceans, the dolphins even seem to be teaching techniques to their offspring, sharing innovation across generations. To deal with octopuses, dolphins have adopted some fairly specific behaviors to basically beat their meal into submission before finally eating it.

The observed dolphins started by lightly grasping the octopus in their mouths, but not so tightly that the cephalopod could solidly wrap it’s tentacles around their beak. The dolphins then breached the water and snapped their body sideways to toss the octopus against the ocean’s surface. Even if the octopus wasn’t completely released, it was still slapped against the water hard enough to stun or even injure it. This process can be repeated, until the octopus is unresponsive, and quite likely very tenderized, so that it can be safely swallowed without further repercussions.

It’s unknown if the adult dolphins seen tossing octopuses are teaching their families this method of meal preparation, but this specific behavior has been documented at least 45 times, and seems very intentional. Aside from how effective it is, it’s also not something a dolphin would be doing by accident. After ancient cetaceans returned to the oceans millions of years ago, their neck bones have been getting shorter and shorter, since in the water a neck isn’t really necessary. This means that the dolphins have to torque their whole body to get a good throw, lacking much of a neck joint to “snap” the octopus like terrestrial predators that more commonly shake their food into submission before eating. The consistency and specific movements required strongly suggest that dolphins consciously understand what they’re doing, or at least what steps are needed before they can eat their sucker-covered snack.