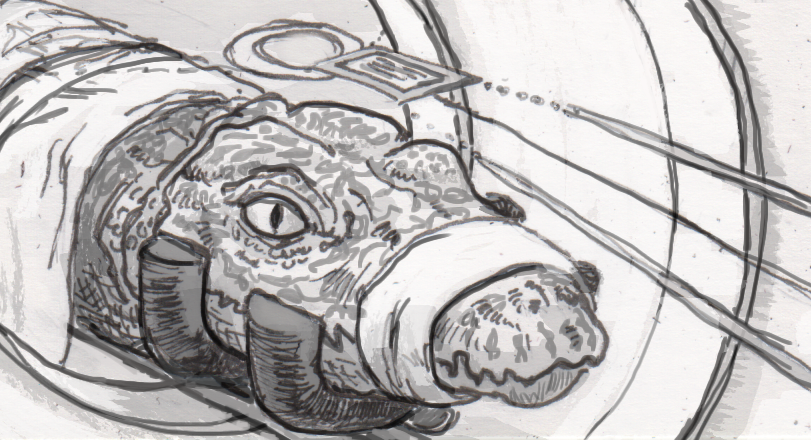 One of the most important parts of getting good data from an MRI is that the subject hold as still as possible, even when being asked to perform a task. This will ensure that the resulting images are clear and crisp, allowing researchers to get more precise data about how anatomy functions, from watching a dye circulate through a kidney to watching changes in oxygenation of specific brain structures in response to stimuli. It’s also a good idea for the subject to avoid biting the MRI technicians, particularly when the subject is a Nile crocodile.

With a few extra precautions, such as light sedatives for the juvenile crocodiles (Crocodylus niloticus), researchers have managed to get the first scans of crocodile brains in action. They were presented with variety of stimuli intended to activate specific portions of their brains, such as visual processing centers in response to flashing green or red lights. Auditory responses were first tested with basic, synthetic tones at either 1,000 or 3,000 Hz. However, those sounds were then followed up with the more complex sounds of Johann Sebastian Bach’s Brandenburg Concerto No. 4, a composition used in many animal studies to see if the test subject differentiates between random beeps and a complex, structured series of sounds.

It would appear that the crocodiles did appreciate the music. While the beeps stimulated some auditory centers in the crocodiles’ brains, the concertos were processed by a wider set of brain structures, indicating that more cognition was taking place to unpack those sounds. The particular patterns weren’t completely novel, as they roughly followed the activity seen in birds or mammals when they listen to Bach. Of course, considering how distantly related crocodiles are to mammals, this is quite significant. Crocodiles last shared a common ancestor with birds around 240 million years ago, and mammals 320 million years ago. While it’s possible that this neurological pattern has evolved more than once, it’s probably more likely that it is something all these groups of animals inherited from a common ancestor as far back as the Carboniferous period, and is thus shared across all mammals, birds and reptiles.

Of course, an appreciation of complex sounds and patterns may even be older than that, but we’d need to get more distantly related animals into an MRI to find out. Fortunately, this study has helped pave the way for future brain scans, particularly with the challenges of scanning cold-blooded animals like reptiles, amphibians and fish. MRI images don’t detect electrical activity between brain cells, instead showing where oxygen is being depleted in the brain. This is partially dependent on the animal’s body temperature, which is easier to deal with in mammals and birds since our warm-blooded bodies maintain a stable temperature on their own. The crocodiles required a lot of careful adjustments though, since even the MRI machine itself would raise the crocodiles’ temperature enough to change how they were using oxygen. With that experience under their belt researchers now hope to use these lessons with other creatures to discover which creatures’ brains can’t handle classical music.

My third grader asked: This didn’t hurt the crocodiles, did it?

The crocodiles didn’t experience pain, and apparently showed little signs of discomfort. While they were sedated, and their mouths and tails bound, the crocodiles seemed to be quite comfy when in the confines of the scanner tube. Once they were inside, they turned out to be very cooperative test subjects, holding still during the scanning process. In the end, they followed all the aforementioned guidelines, including the bit about not biting anyone.

Source: What Scientists Saw When They Put a Crocodile in an MRI Scanner and Played Classical Music by George Dvorsky, Gizmodo