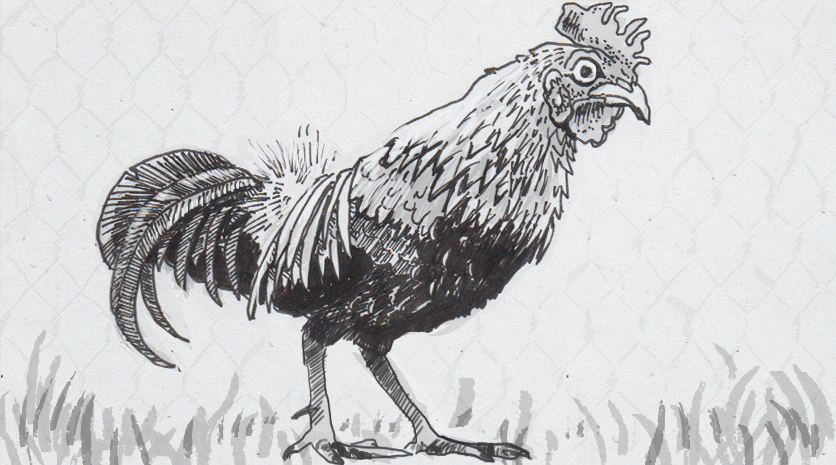 Breeding for temperament may trigger a torrent of new traits

We know that evolutionary change is a dynamic process involving a species and its environment. Each horn, tooth or hoof helped (or at least did not hinder) an animal’s success in its world, and thus the genes for that trait were passed on. We’re now finding that those traits do not evolve discreetly, mainly thanks to the interconnected nature of organisms’ physiology. Changes to a critical feature, like serotonin levels, may be expressed in both personality shifts as well as metabolism, and thus growth rates. In chickens, this would have meant that domestication of these birds was a win for early farmers on multiple levels.

The experiment looking at these relationships started with 60 wild chickens, Gallus gallus. Also known as Red jungle fowl, these birds are thought to be the wild ancestor that was domesticated in Asia around 5,000 years ago. The males are rather flashy looking, with multicolored plumage, long tails and striking combs. The researchers started breeding these initial pairings, selecting not for size or color, but temperament. The animals were subjected to small tests to determine their sensitivity to fear, such as a harmless touch from a human. The less fearful birds were then bred with each other, eventually leading to much calmer, albeit more assertive, chickens.

The change in temperament accompanied changes in anatomy as well. The fearless chickens were generally larger and produced more eggs, growing faster with more efficient metabolisms. The underlying trigger for this, at least after five generations, is likely serotonin levels, which seem higher than in the more fearful branch of the family. Serotonin plays a role in fear response and metabolism, so this wouldn’t be too surprising, but it would be an interesting demonstration of how changing one attribute in an animal can produce a range of differences in the animal’s development and conduct.

Similar work has shown even more dramatic changes in foxes. In the 1950s, Soviet researchers started breeding foxes, choosing pairs according to how tolerant they were of having a human reach into their cage. The calmer animals’ offspring quickly started being born not only with the specified lowered fear responses, but also a variety of other traits we associate with domesticated dogs, including spots, lighter colored fur, floppy ears and even barking. Later generations were noted as being playful and so comfortable with humans they’d even come by name when called. Like the chickens, these foxes demonstrate that no trait evolves discreetly from the rest of the animal, and in some cases evolutionary change may have happened in dramatic cascades, rather than isolated, metered increments.

Source: Here’s what happens when you rewind the clock on chicken domestication by Elizabeth Pennisi, Science Magazine