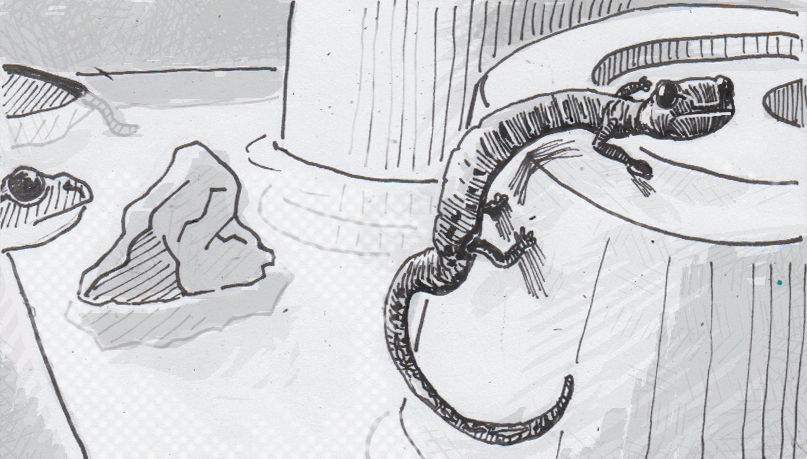 Brief observations of our backyard amphibians

Thanks to a couple of six-year-olds, we had some unexpected zoology lessons this weekend. Our neighbor’s backyard turned out to be the home of two species of salamander: an Arboreal Salamander and three California Slender Salamanders. The kids were thrilled with themselves, but it didn’t take long to realize that nobody really knew who these amphibians were, or what they were up to in the garden.

The California Slender Salamander lives up to its name, as the kids didn’t even notice the animals legs at first, thinking they’d found a particularly beefy worm. But the stubby legs and bulbous eyes were eventually noticed, as well as some subtle spotted patterning on their backs. The dark-skinned animals seemed to all be adults, based on their size, which was probably close to five inches each. One of them had a stubbier tail than the others, which may mean that it had recently used it’s ability to voluntarily amputate its tail to avoid a would-be predator.

There were a number of things about these salamanders that we didn’t quite see just by watching them squirm around in a bucket for a few minutes before returning them to the garden. For one, they didn’t have lungs. All salamanders in the Plethodontidae family instead respirate through their skin and mouth tissues. They then need these tissues to stay moist, meaning they avoid dry conditions but also don’t really spend extended time in the water. The slender salamanders match these needs by exploring underground tunnels made by other animals, which provide insulation from the sun’s heat as well as moisture trapped in the soil. The tunnels and burrows also provides them with good hunting grounds, as they like to eat insects that may have made the tunnel in the first place.

The Arboreal Salamander was smaller, no longer than three and a half inches probably. It was very pale, with only hints of lighter does along the side of his torso. The skin on his belly was so light you could see shadows of organs inside. And we were lucky enough to have nobody discover the fact that he was packing a set of teeth sharp enough to draw blood.

Like the Slender Salamanders, Arboreal Salamanders are also part of the Plethodontidae family, lacking lungs but relying on skin-based respiration. We apparently didn’t scare it too much, as we saw no signs of defensive posturing or squeaking, although we did see some jumping and climbing. Most importantly, we didn’t see any eating, which is probably for the best as Arboreal Salamanders sometimes eat Slender Salamanders (in addition to the less alarming choices of insects, snails, and other invertebrates.)

Our neighbor’s garden is shaded and undisturbed most of the day, so it makes sense as a habitat for these two species to call it home. It’s not clear where the Arboreals are finding suitable substitutes for rotting oak trees for laying eggs, but the Slender Salamanders definitely have some good rocks and tunnels to make into a nursery of sorts (especially since the Slender Salamanders may share egg-laying locations with each other.) Aside from needing moisture, neither species actually requires large amounts of water, especially since they’re born in their adult form, vs. aquatic larval stages like a Tiger Salamander.

Source: Identifying California Salamanders by Gary Nafis, A Guide to the Amphibians and Reptiles of California