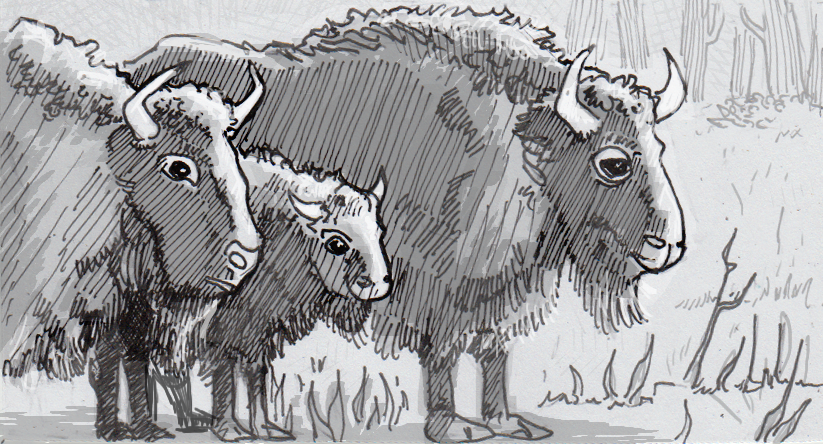 Bringing Europe’s bison back from the brink

European bison have had a rough couple of centuries. While they once roamed Europe from France to central Russia, hunting and reduced habitats effectively left them extinct in the wild by the 1920s. The good news is that this decline did not go unnoticed, and conservation efforts seem to finally be turning a corner for the largest animal in Europe.

As humans deforested areas around Europe, the bison’s habitable territory shrank, reducing their population. With each century, the list of nations with a wild bison population would be reduced, until a final herd was left in Poland. That herd was declared property of Polish kings to protect them from poaching under penalty of death, but that wasn’t enough to save them from World War I. By 1927, the herd had shrunk from 600 animals down to around 50, all sheltered in zoos.

Attentive care of those final animals looks like it’s paying off though. Starting from such a small gene pool has been risky, but some hybridization with American bison has helped prop the species up. Now their numbers are high enough for serious reintroduction programs, such as in Romania. There are high hopes for these bison released in the Carpathian mountains, especially if they can be guarded from further poaching.

The bison are considered a keystone species that should catalyze biodiversity in a number of ways. Their hooves break up soil, their grazing clears space for grasses, flowers and thus pollinating species. And since they forage throughout the forest, their herbivorous diet and dung will help spread seeds to new locations.

This doesn’t mean everyone wants them in their neighborhood though. Farmers and forest managers who have not dealt with these six-foot-tall animals for the last 80 years fear they’ll be too destructive to their land. To help the bison stay out of trouble, researchers have been studying their behavior to see how herds move around. They found that there isn’t a single leader of any herd, but that generally adult females lead decisions about when the herd should change locations. This may be because she would be most sensitive to the quality of food available when responsible for gestation and nursing.

The decision making is easy though— any member of the herd that walks 20 steps or more in a straight line with his or her head up is signalling that others should follow. The more animals already facing that direction, the higher the odds everyone will move. This is great for conservationists, who can now focus their efforts on tracking these females to remotely look for signs the herd is moving so that they can be diverted away from sensitive areas. This would be accomplished with GPS collars, plus remote alarms or shocks to convince them to maybe choose a different path. It’s not quite the same as a king’s protection, but hopefully it will help the animals co-exist with humans better than death threats did.

Source: Return of the European bison by Adam Vaughan, The Guardian