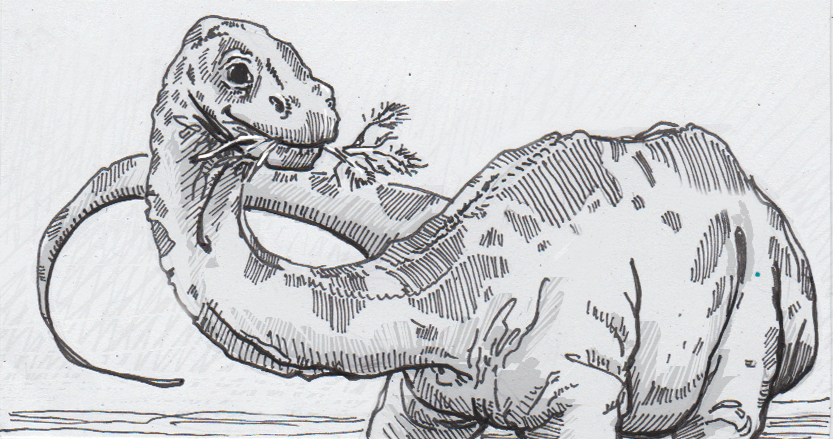 Brontosaurus excelsus: The biggest dinosaur comeback of the last 100 years

The first Brontosaurus, Brontosaurus excelsus, was found in 1879 by Othniel Marsh. It didn’t last long. By 1903, the Brontosaurus specimens were judged to be too similar to the previously discovered Apatosaurus ajax, and were thus absorbed into that genus. Now, over 100 years later, the taxonomy of all diplodocids have been reviewed, and the Brontosaurus name has been brought back into service.

The initial naming confusion came during a period of time known as the ‘Bone Wars,’ where Marsh was competing with fellow paleontologist Edward Cope to unearth as many fossils as possible. A fair amount of confusion was present at this time of rushed discovery, leading to other mix-ups like an Apatosaurus being displayed with a Camarasaurus head mounted on it. As corrections were made, the Brontosaurs fossils were reassigned to the Apatosaurus genus, meaning, as far as anyone understood, Brontosaurus never really existed as a genus (even though this didn’t stop the next 100+ years of pop culture using that name.)

What’s in a name?

This is not to say that paleontologists thought these specimens were all the same species. They were always known to come from different animals as much as homo erectus different from homo sapien. But, as my kindergartner will attest, these layers of specificity are confusing to parse, especially when we’re used to names like Tyrannosaurus Rex being the “whole” name for that animal. So while only the genus was ever contested, few people had ever concerned themselves with excelsus as a name for the species, at all times, continued to exist.

So where is brontosaurus excelsus now?

The aforementioned review of diplodocids by Emanuel Tschopp has of course reshuffled the whole family. Brontosaurs were found to have significantly lighter-weight necks than apatosaurs, splitting them into their own genus once again to the delight of general audiences older than Dinosaur Train. Diplodocus hayi was split into a new genus as well, called Galeamopus. And, similar to the original brontosaurus/apatosaurus conflict, there was some consolidation as well; Dinheirosaurus was reevaluated as part of the geographically distant Supersaurus genus, which will hopefully bear further investigation.

The reshuffling also nicely demonstrates a tenant of good science- when the evidence doesn’t support your model, you need to readjust. In this case, there’s also a demonstration about how emotions don’t follow that idea, and you have people getting upset over a name change. But both times Brontosaurus’ name has been changed has followed the best available evidence and analysis at the time. Mistakes happen, but good science also has ways to correct them.

My kindergartner asked: So… what’s the big deal? Which isn’t surprising, as she has no nostalgia attached to the name ‘Brontosaurus.’ She was aware of the original renaming incident, and despite familiarity with Apatosaurus via Dinosaur Train (and my best attempts to be a diligent nerd correcting older, ‘incorrect’ books), she barely saw the point of this as an event. She’s always been more of a brachiosaurus fan anyway.