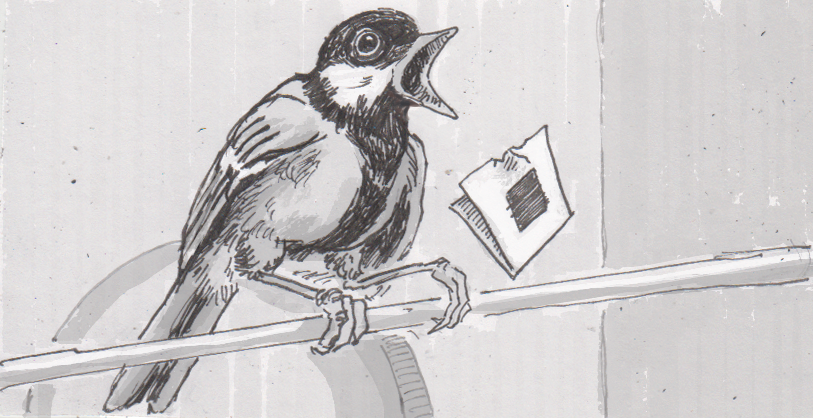 With their bright red bodies and black spots, it’s easy to spot ladybugs crawling among green leaves and stalks. These insects can get away with this eye-catching appearance because they carry toxins that make them unappealing to predators, but that strategy only makes sense if the predators know about it. These so-called “warning colors” can only work if animals like great tits know they represent an unpleasant experience, although scientists have wondered how ladybug populations survive the birds’ dietary education. In an experiment with video screens and artificial bugs, researchers have now confirmed that the birds demonstrate their disgust strongly enough to convince their kin to skip even sampling potentially toxic food.

To test how great tits (Parus major) might teach each other to avoid colorful bugs, researchers needed to present them with a conspicuous snack they’d never encountered before. Their aviary was littered with pieces of paper marked with black crosses as an artificial ground cover. Mixed in with those chits were tiny packages of food, either marked in a matching black cross to represent an insect that camouflages itself, like a green winter moth caterpillar, or a black square, standing out like red ladybug. Accordingly, the black-square “ladybugs” held an almond soaked in bitter flavoring, although the tits had to learn that fact the hard way.

When a bird tried eating the black-square packets, they rejected the bitter flavor immediately, as bitterness is often the result of toxins in a plant or insect. Instead of simply spitting the bitter almond out, the bird took the extra steps to wipe its beak on its perch, not unlike a small child dramatically rejecting their spinach at the dinner table.

Learning from others’ mistakes

Unbeknownst to the tit, it shared this foul-tasting snack with other birds via a video feed to a second aviary. The viewing audience paid pretty close attention, and apparently modified their own foraging tactics based on their peer’s beak-wiping behavior. When given the chance to browse paper chits on their own, tits that witnessed a grossed-out peer were 32 percent less likely to pick up a bitter, square-marked almond. This saved them from having to sample the bitter “bug” themselves, but in the wild would have saved a brightly colored ladybug as well.

That last fact is one of the significant implications of this study. While we’ve known that insects and other animals are often brightly colored to scare off predators, it wasn’t clear how they could ever arrive at that state. If every predator had to personally eat a red bug in order to learn that they taste bad, so many red insects would need to be eaten the that it would hardly help the bugs’ survival rate. Since predators like great tits can learn from each other, the benefit of being brightly colored has a chance to be multiplied across the species. The tits in this study adjusted their behavior after witnessing just one disgusted peer, so researchers are suggesting that learning curve of predators needs to be more carefully considered when studying the evolution of prey animals.