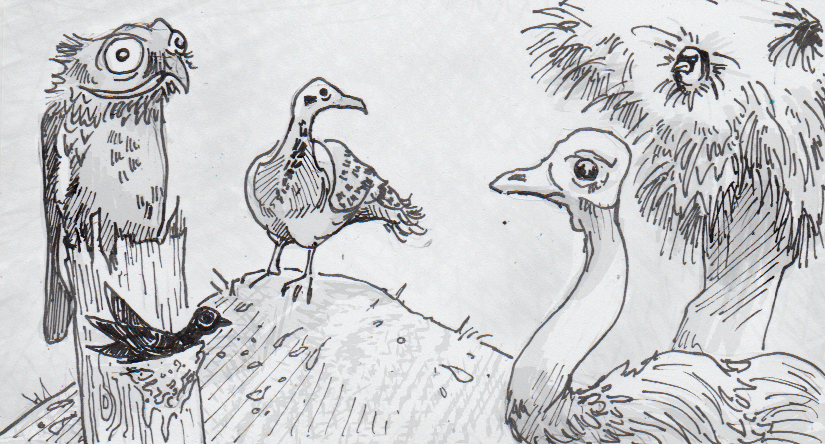 Building a better nursery with birds around the world

My first grader has been spending a lot of time sitting in a tree in our front yard, and between numerous reminders from her parents to “not fall,” she wondered how bird nests manage to stay in place in trees. The answer, like so many things, is that it really depends on which bird’s nest you’re talking about, since each species has its own twists and nuances to better match the demands of their environment. Probably the only universal point is that nests are to protect eggs and/or babies, not for adult birds to live in. Beyond that though, the breadth of designs make some nests unrecognizable unless you really know what to look for.

The best nests feet can build

The simplest designs actually omit building a nest at all. Emperor penguins just use their own feet, while Potoos will at least look for some sort of natural indentation in rocks or a stump to help keep their eggs from rolling away. Slightly more industrious birds will dig out a small indentation in the ground, called a scrape, possibly lining it with plants, stones or feathers. These are most often used by flightless birds, like ostriches or quail, and may include just enough covering to hide the eggs from possible predators.

The twigs really tie the room together

Flight opens up birds’ real estate options, and makes the iconic “woven cup” design viable. Twigs, sticks, string, feathers and grass can all be woven into a variety of shapes to house and insulate eggs in a tree. These structures are often affixed with mud, spiderwebs or even the parent birds’ saliva. These nests can be further protected with camouflage, such as with hummingbirds’ use of lichen and moss to make their tiny cupped nests less obvious along a branch.

A more extreme woven design would be the massive woven nest of sociable weavers (Philetairus socius). Groups of up to 400 birds will collaborate over generations to build massive, multi-family dwellings in the African desert. The thick, bushy nests obviously aren’t about maintaining a low profile, instead providing insulation from both heat and cold.

The strangest “cupped” nest may belong to edible-nest swiftlets (Aerodramus fuciphagus). These birds build their nests entirely out of layers of hardened saliva on the sides of rocks, cliffs or buildings. The spartan accommodations protect eggs by putting them out of most predators’ reach since they can be affixed to surfaces inaccessible from the ground. The exception to this is humans, who harvest the saliva to use in soups as an aphrodisiac, despite it being basically flavorless with no nutritional value.

On the other extreme to these delicate nests is an impressive piece of engineering by the malleefowl (Leipoa ocellata). It’s not a much to look at, but the fact that it comes with central heating is fairly impressive. The male bird starts by digging a wide, shallow hole and then filling it with rotting organic material. He then starts covering that in an insulating layer while leaving an egg chamber at the top of the rotting mound of compost. Once the 15 or so eggs are laid, the insulating layer is completed, trapping heat from the compost inside so that the entire structure, up to two feet tall in the end, functions as a giant incubator, keeping the eggs ~91º F. The mound is guarded and maintained by the father until the eggs hatch, but once they do the chicks are entirely on their own, running within two hours of their first steps.

My first grader asked: Do people who eat the swiftlet nests bother the eggs? The industry around these eggs may be beneficial to the young birds, since nest “farmers” would like the species to continue reproducing. People even build artificial structures, then play recordings of the birds, to attract more swiflets to nest in more conveniently-harvestable locations.