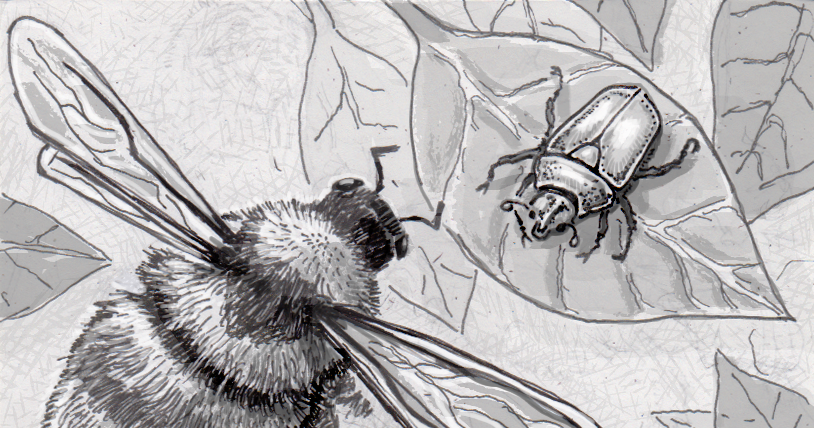 The shiny, shifting hues of an iridescent peacock feather is usually pretty eye-catching. Thanks to nanometer-sized structures in the feathers’ surface, light is reflected at a variety of angles at once, giving the feather a seemingly dynamic range of bright colors. Beyond a peacock’s blue-green feathers, iridescence can be found in fish scales, sea shells, and minerals, but the flashy appearance in animals like birds may have confused our understanding of its utility. While we may find it enjoyable to look at, researchers are finding that bees, and likely all insects, have a hard time comprehending the silhouette of iridescent objects, suggesting that some of these bright, shiny materials may have actually evolved to help some creatures hide from predators.

To investigate how insects see iridescence, researchers created artificial flowers in various shapes for bumblebees. Once the bees had learned which shape was likely to have the highest concentration of sugar water, the flowers were covered in iridescent materials to see if the bees could still locate the best food sources in these new conditions. Even though the silhouettes were the same, the bees had a lot more trouble finding their favorite-shaped ‘flower,’ indicating that the new color scheme made it hard for them to recognize the form of each object.

While bumblebees are not predatory themselves, their eyes are similar enough to other insects that researchers believe this has implications for visually-oriented insect predators. A beetle with a matte wing case might be easy to spot on a leaf, whereas the iridescent wing case of a rose chafer (Macrodactylus subspinosus) likely looks like a confusing jumble of shapes, making the beetle hard to identify from a distance. Of course, being able to hide from other insects may not be most bugs’ biggest concern, as birds are much more likely to pose a threat to the average beetle. If researchers can confirm that iridescent body parts also disrupts bird predation, it would demonstrate how looking flashy may have evolved for insect safety, although it might also raise questions about those peacock feathers that were presumably meant to be examined by other birds.

Camouflage based on confusion

This concept of dazzling camouflage was first coined over 100 years ago by Abbott Thayer. The artificial camouflage used by militaries today operate on a similar principal, as they aim to break up easily recognizable silhouettes of humans and vehicles just enough to make them harder to target. Zebra stripes are thought to function in a similar way, as a herd of black and white stripes shifting and moving may make it just a bit harder for a predator to target a single individual, buying the zebras a few precious seconds for escape. Since iridescence turns up in other places, such as minerals, there’s likely more uses for it than just camouflage, but dazzling predators like this would help explain how certain bugs “hide” in plain sight.