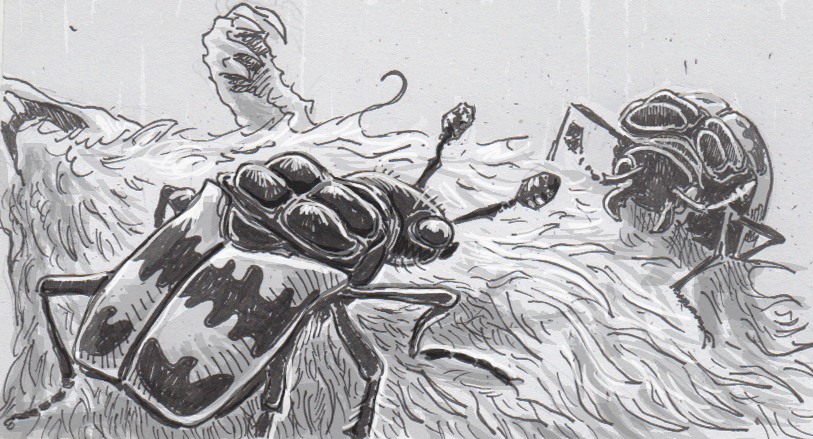 What makes a good mother? Is it a warm, nurturing attitude? An instinct to provide safety and sustenance to one’s offspring? Or maybe it’s a set of battle-scars, earned while brawling over the rotting carcass of a bird or mouse? As far as I know, the latter hasn’t been recommended in too many parenting books, but it does play a large role in shaping the maternal instincts of female burying beetles.

Burying beetles (Nicrophorus vespilloides) are carnivorous insects that put a lot of energy into raising their young. Their large antennae help them locate a dead animal in their locality, preferably with their mating partner. If other beetles arrive at the same time, potential parents will fight over the corpse, with males fighting males, and females fighting females. The winning couple will then remove any fur or feathers, then bury their deceased prize underground. Once the body is secured, the beetles coat it in oral and anal secretions to slow decomposition, and keep the smell of the body from attracting other animals. The mother beetle then lays eggs in the soil near the body, so that it will be a ready food source when the larvae hatch. If possible, both parents may stick around to tend to their young, feeding the larvae and perhaps culling weaker members of the brood to save food for healthier offspring.

Fighting over a body not only secures a food source to allow for reproduction, but also shapes female beetles’ attitudes as mothers. If a female finds a corpse without any competition, she’s less attentive to her offspring after they’re hatched. Females that had to battle for resources are generally more attentive, and have more offspring survive to adulthood. This isn’t due to a winning mom being a more fit beetle to begin with though, because even females that lose their first fight, and then reproduce at a later time, will show an increase in their maternal efforts.

The long-term benefit of fighting for food is a sense of perspective. Mother beetles who participated in a fight for a dead mouse or sparrow learn a different appreciation of how scarce resources in their area may be, which pushes them to make the most of each batch of eggs. Burying beetles that were able to find a corpse on their own seem to assume that bodies are easy to come by, so they don’t need to invest too much energy in their young, even if they’re laying the same number of eggs as their more maternal counterparts. There are times where a stash of food is deemed large enough to share between multiple beetle families at once, but presumably that also triggers an instinct for more attentive care, since the food supply would again be more limited than a cadaver of one’s own.

Unfortunately, this study didn’t mention the father beetles directly. Considering they were in on the pre-burial pit fight, and usually assist with feeding larvae, it seems like they’d follow the same rules about scarcity and care taking though.