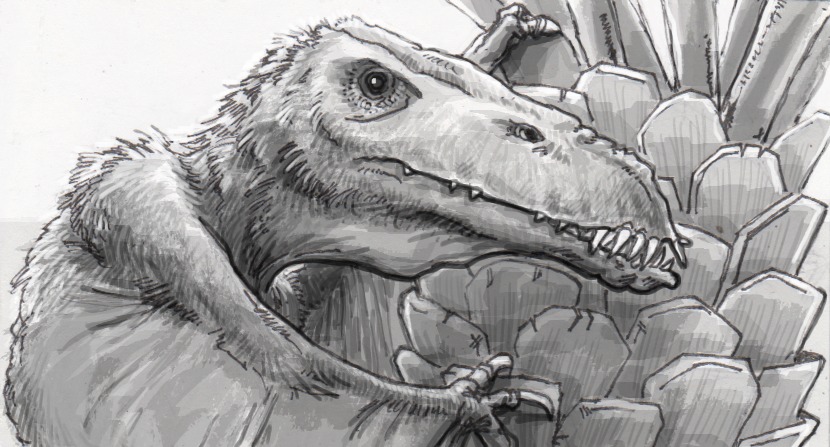 The earliest known dinosaurs have a definite “prototype” vibe going on. Creatures like Eoraptor have many traits that turn up in later species, but they lack the size and specialization that marks the huge, exotic creatures most people are more familiar with, such as Stegosaurus or Triceratops. For the most part, pterosaurs were assumed to be following a similar evolutionary timeline, just establishing traits like flight in the Triassic period, 225 million years ago. However, a specimen found in Utah has paleontologists reconsidering this schedule, as Caelestiventus hanseni seems to have many of the traits normally associated with more specialized species from the Jurassic period. It strongly implies that while pterosaurs prospered alongside dinosaurs throughout the Mesozoic era, they may have actually had a significant head-start in their evolution.

C. hanseni was not only an unusual find, but it was a lucky one. A key trait of pterosaurs was their hollow bones that made flight easier, but made preservation as a fossil much, much harder. Fortunately, a specimen excavated in 2014 turned out to be preserved well enough to keep key anatomy like the skull from being flattened like a pancake. Rather than risk breaking the skull, now, researchers opted to use a CT scanner in order to build a highly detailed 3D model while leaving most of the original fossil protected in its sandstone tomb. The surprising model showed that C. hanseni had a lot of anatomical features around 65 million years before it was ‘supposed’ to.

For starters, C. hanseni’s wingspan was fairly large, probably just shy of five feet, although proportionally those wings were short compared to its oversized head. Based on the proportions of bird wings today, this would indicated that C. hanseni wasn’t cruising over long distances, but instead needed a lot of maneuverability in its flight. It had a flange of bone under it’s jaws, which suggests that it may have had a wattle or even a pouch like a pelican. Utah was a desert at that point in history though, so its diet was likely based around eating insects and small reptiles with its 110 teeth, including four fangs jutting out of the front of its mouth.

Some of these features, like a variety of tooth-shapes and a longer tail, do align with other species of “early” pterosaurs like Dimorphodon. However, Dimorphodon was found in Jurassic-aged rock in England, so to find anything similarly specialized in Utah is also significant. When considering the age and locations of these fossils, it would appear that pterosaurs were firmly established earlier, and with a wider distribution around the world, than people had previously understood.