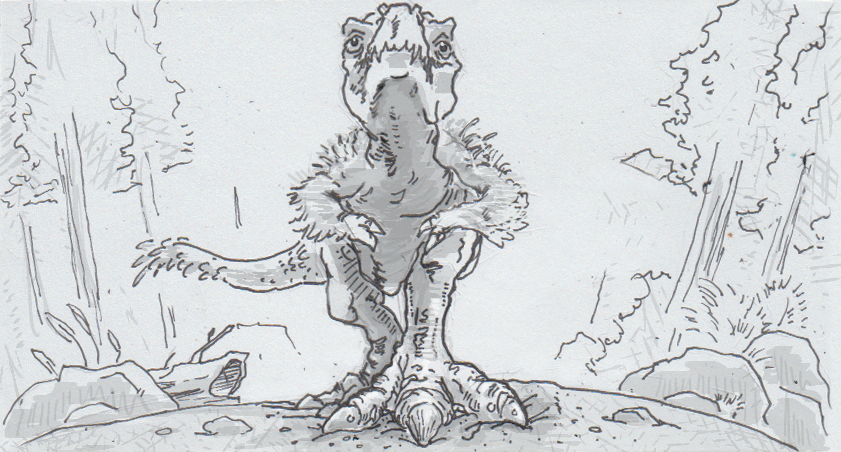 Calculating the speed of a Tyrannosaur’s trot from trace fossils

Nobody likes the idea of a slow, lumbering Tyrannosaurus, except maybe the neighborhood hadrosaurs. While there are many exciting predators in the world that don’t rely on winning a footrace to catch their food, it somehow seems wrong that the Mesozoic’s most popular predator might not have been swift in addition to strong. Calculating an animal’s speed from skeletal anatomy is difficult though, since we can’t know what a Tyrannosaurus rex’s musculature really looked like. Fortunately, trace fossils like footprints not only record information about an animal’s feet, but also what they were doing with them.

T. rex tracks are hard to come by, so a recent batch from Wyoming have gained some attention as a new measure of the theropod’s speed. These particular prints, even at 18.5 inches long by 14.5 inches wide, were smaller than you’d expect from an adult. They’re likely to have been made by either a sub-adult or a smaller species, like Nanotyrannus lancensis. The three forward-facing toes in each print are wide set, with a smaller impression of a fourth toe on the back of the foot, not unlike you see on a chicken.

Not too fast, not too slow

Between the anatomical data and the distance between each print, paleontologists were able to estimate both the length of this tyrannosaur’s legs and it’s speed at the time. It seems to have been moving somewhat casually, around 2.7 to 5 miles-per-hour, basically the same as you would on your way to a coffee shop at 3 miles-per-hour. If this seems disappointing, keep in mind that a horse will often walk around 4 miles-per-hour, but that doesn’t stop them from sprinting up to 55 miles-per-hour when the time comes.  Larger, heavier animals like elephants usually walk around 5 miles-per-hour or so, although their runs only hit 25 miles-per-hour.

The estimated speeds from these tracks doesn’t put the theropod in any new top-ten lists, but they’re actually good news for paleontologists. Previous estimates from different data also found a walking speed in this range, and so more evidence agreeing with those models makes the overall model more robust. The speeds also make sense, since a tyrannosaur wouldn’t need to be the fastest walker in the forest. As long as they were able to successfully capture prey, which in the case of hardrosaurs, may have been around 33 miles-per-hour. Nothing a good ambush, sprint and chomp couldn’t handle.

Source: Could You Outrun a Hungry Tyrannosaur? by Jon Tennant, D-brief