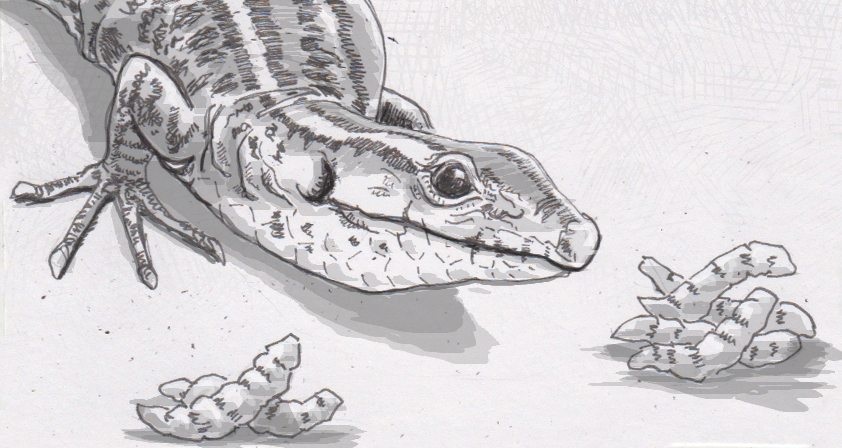 Calculating which animals can keep track of quantities

As a four-year-old, my son has become intensely appreciative of quantities. He’s most likely to do some number crunching if there’s a chance his sister is receiving more desert than he is, but any countable resource is apparently worth working on some number theory. Humans can do a lot more number manipulation as they grow up, but keeping track of food is thought to be one of the fundamental motivation for any species to keep track of quantities. With that in mind, comparing food sources is a way for researchers to figure out where the ability to count starts and ends in the animal kingdom.

One example of such a test involved ruin lizards (Podarcis sicula), a small reptile native to Europe that dines primarily on insects. The lizards were first proven to have an interest in maximizing their food intake by offering them large or small fly larvae for a snack. The lizards consistently showed a preference for the bigger bugs, at which point the choice was changed. Instead of size, the only variation was in the number of larvae, which… seemed totally lost on the lizards. Differences in quantity were ignored, even though the lizards clearly preferred to eat more food when given the chance to eat larger bugs.

A form of African jumping spider seems to have a bit more interest in quantities, although getting that information out of them isn’t that easy. Researchers relied on the particular hunting tactics of Portia africana to reveal moments when the spider was keeping count of its targets. The spiders will usually see their prey, then circle around them to attack from a different angle, even if it means temporarily losing site of their targets. Researchers exploited that interrupted view to switch the number of prey the spider then encountered, and looked to see if the spider showed any kind of reaction. The spiders did react to the unexpected headcounts, but only to a point. They seemed to catch changes such as one to two, one to three or three to two. Any quantities over three washed out though, apparently becoming a generic “many” in the spider’s mind, since changes like three to six or four to five made no difference in the spider’s behavior.

Counting in the cranium

These studies are helping narrow down when animals can and can’t make out specific numbers, all of which is helping explain how humans process math too. Experiments with humans have even suggested specific brain structures as key components of how our brains count. Children and adults had their brains scanned in MRI scanners, and a region called the intraparietal sulcus (IPS) stood out when they thought about quantities. What’s more, kids with more ‘mature’ activity in their IPS were more likely to score well on math tests. This doesn’t mean that a robust IPS is the nexus of math aptitude, as there is  more than one way for a brain to handle numbers, but it could be helpful in looking at how we learn math, and how these abilities evolved in the first place.

My second grader asked: Do I have a big IPS?

I don’t have an image of her brain, but even if we did it seems that researchers were looking for a pattern of activity that matched an adults’ math processing, rather than outsized brain structures. It may be more of a spectrum of development rather than bulk neuron count.