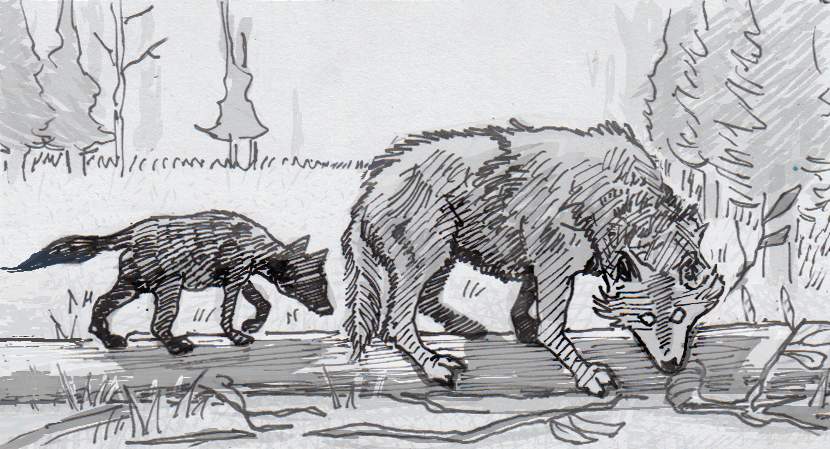 Despite wildfires, earthquakes and pricey real estate, a very special family of seven just moved to Northern California. More accurately, this pack of two adults and five four-month-old gray wolves was spotted near the Oregon border, and is thought to be descendants of that state’s larger “Rogue Pack.” Conservationists are now working to confirm the identities of the canine family and make sure their transition to California goes smoothly, since they’re the first pack of wolves seen in the state in nearly 100 years.

Gray wolves (Canis lupus), sometimes called Timber wolves, are predators in their ecosystems. Working as a group, gray wolves target larger herbivores as prey, such as deer or moose, although beavers or hares will do in a pinch. The largest males can reach 145 pounds, and generally live between eight and 13 years. The new Californian pack, called the Shasta Pack, is a typical size, although in some cases packs with 30 members have been observed. The two adults in the mating pair function as the top of the pack’s hierarchy, and are the only members that are allowed to breed. Their offspring will either stay with them as subordinates, or move to start their own pack in a new territory.

While gray wolves used to be more common in California, conflicts with ranchers and hunters nearly lead to their extinction. Humans more or less felt they were competing with the wolves as apex predators for livestock and deer, driving them to endangerment. Federal protections have been put in place, but populations have still needed some extra care to regain a foothold on their old territories. Successful reintroduction efforts, such as in Yellowstone, has led to more than just more wolves though, with shifts in ecosystems on a variety of levels, even including water quality.

For now, the Shasta Pack will just be tracked and monitored. If possible, a collar will be put on one of the parents to keep a closer watch on their activities. Eventual genetic testing will also help confirm the lineage of the pack, which would help inform researchers about the movements of wolf populations throughout the region. So far, this pack has already exceeded expectations in an environment that has rapidly changed in the last 100 years.

Update: As of January, 2016, a new adult male was seen in Northern California. He also originated from Oregon, indicating that the efforts to restore these animals’ range and habitat is on the right track.