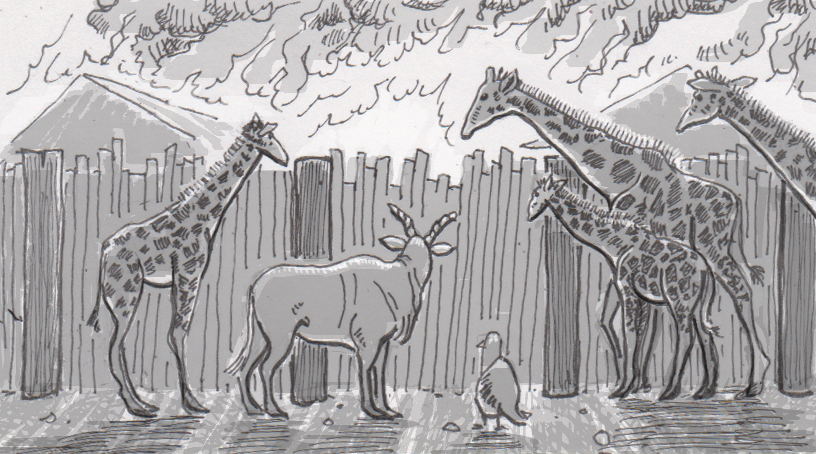 What California zoos can do for their animals during fires, earthquakes and tsunamis

How do you move an elephant through a city that’s on fire? If people are supposed to hide under a solid surface like a table in an earthquake, what should a giraffe at the zoo do? As we’ve been teaching our kids some basic earthquake safety, they’ve of course been thinking beyond the patterns and scenarios that most adults limit themselves to, and answering this question caught me flat-footed, even though I’ve experienced both earthquakes and giant wildfires. It turns out there are a lot of layers to protecting captive animals in a disaster, largely thanks to how different these disasters can be.

Unless you’re in the fire department, the way people are supposed to respond to encroaching wildfires is to evacuate. History has shown that getting people to cooperate with these orders isn’t easy, so it’s not a huge surprise that zoos can’t really attempt to relocate every gazelle, zebra or rhino. Zookeepers generally try to move animals to their off-exhibit barns so they’ll be somewhat shielded from the smoke and chaos of sirens and helicopters, as panicking animals can be a safety hazard even if the fire never touches the zoo itself. If an animal isn’t cooperative, zookeepers can’t spend too much time convincing them, as they’re often under evacuation orders themselves and the zoo doesn’t want to loose any humans to a fire either. Fortunately, grazing herbivores do a good job of removing fuel from their environment, so a fire at a fence might not find a lot to burn inside a paddock.

Some animals might be transported away from an obvious threat like a fire. Small, non-venomous reptiles and mammals that can be more easily handled might be packed up. Zoos with special conservation projects, such as the California condors and their eggs at the San Diego Zoo, will be captured and moved away from dangerous locations, as they’re about as irreplaceable as an animal comes while being more portable than an agitated lion. Otherwise, zoos run emergency drills to help make the best of a tough situation.

The aftermath of animals in an earthquake

In California, those emergency drills have to also include plans for earthquakes. Unlike a fire, an earthquake gives you no real warnings to react to, and so zoos instead have to focus on making the fallout as painless as possible. Teams plan for resecuring animals, coordinating with city fire departments and police if necessary. The Oakland Zoo, which sits at the top of a hill along the Hayward fault in Oakland, is included in city disaster response plans, so that that coordination doesn’t have to be figured out after the fact.

Otherwise, zoos have to deal with earthquakes a lot like any other resident who’s been shaken. They have at least three days of extra food, water and fuel to run generators, which would hopefully be enough time for roads to be reopened for fresh supplies to be delivered. While parks would ideally be evacuated after an earthquake, there’s the chance that visitors would be stuck at the zoo for a while too, adding an additional layer of complication to tending to the animals, structures, etc.

Coping and clean-up after a tsunami

While the Oakland Zoo has to be ready for an earthquake, their high ground away from any water at least clears them of tsunami problems. The San Francisco Zoo, on the other hand, is a stone’s throw from the ocean, meaning that tsunami plans are one of their biggest concerns. Thanks to being triggered by an earthquake, there’s not a lot of time to react to a wave before it hits. Plans are in place to help coordinate evacuations and tend to casualties, but there’s only so much that can be done against a surge of water big enough to carry a building.

It may sound grim, but these events are considered to be disasters for a reason. In the wild, some animals may manage themselves fairly well, but we also have evidence of fires and floods claiming animals lives for millions of years.