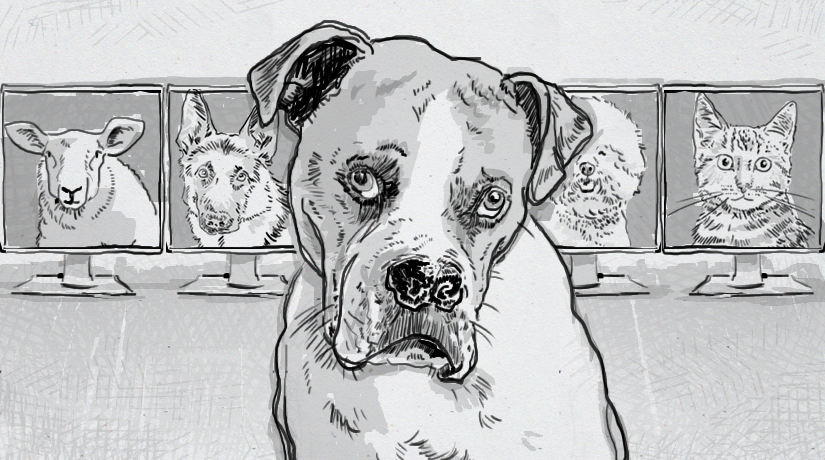 Can Spot spot another dog from sight alone?

If put to the test, you’d probably do pretty well at differentiating between a human and a non-human. The relatively narrow range of human features, plus our species’ sophisticated visual capabilities make this essential task fairly obvious to us. Before we pat ourselves on the back too much, researchers have now determined that dogs can do the same thing, but under more difficult circumstances. Aside from not being as visually-oriented as humans, dogs have the most anatomical range of any living creature, making recognizing a fellow canine much trickier than simply matching what they see in the mirror.

Showing us what they see

While humans have decided that even a sink can display a relatable face, scientists in France wanted to see how much leeway different breeds of dogs would give each other’s faces when deprived of cues like smell. To do this, they first had to establish a way to get dogs to point to dog faces instead of other images. Test subjects were shown a photo of a dog and of a non-dog, like a cow or color field. If they walked toward the dog photo, they were rewarded with a treat, establishing the preference for the single dog photo.

The real test began when the variety of imagery was drastically increased. Rather than the one training-dog image, dogs from many breeds and angles were displayed. The non-dog images were also shaken up, and included a larger variety of animals than during the training sessions. This required that the test subjects apply a greater degree of scrutiny to each visual, carrying the training request of “find the dog” and applying it all dog photos. While it may seem difficult to assume the test subjects would even make that jump in logic, most did very well, with some honing in on the dog images almost immediately.

Perceiving a range of peers

While this study didn’t discover exactly what visual cues dogs are using to separate themselves from something like a llama, it does demonstrate the importance of species recognition. Many animals are thought to have special markings or adornment to help them be recognized by their cohort, and this drive seems to be strong enough to even withstand the thousands of years of genetic modifications humans have made in Canis familiaris since their domestication.

Source: Do Dogs Know Other Dogs Are Dogs? by Julie Hecht, Dog Spies