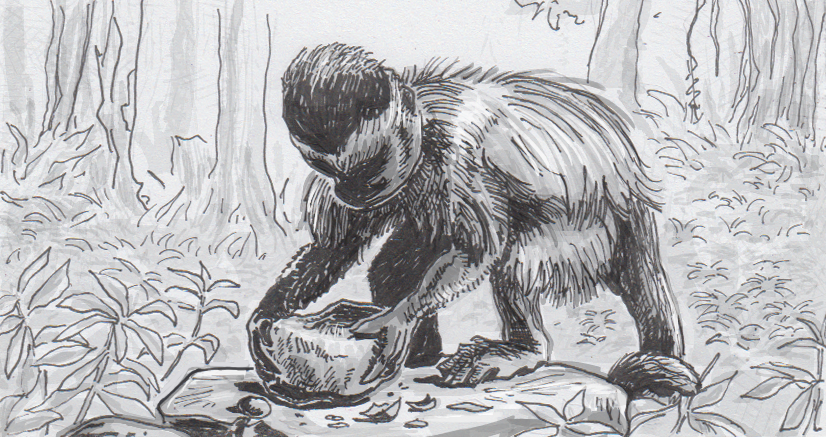 Capuchin monkeys have been making tools for at least seven centuries

It’s safe to say that humans are basically dominating the technology market on Earth right now. Between pocket-sized computers, Large Hedron Colliders and International Space Stations, it feels like we have a monopoly on the whole “innovative tools” thing. While no bird or chimp is about to start smelting steel or designing a deep-space satellite, it doesn’t mean they’re not working on it, in there own way. We know that we’re not the only animals to use tools, or even the only primate to craft them. Besides our closely-related chimps, other species of monkeys have been found crafting and using basic tools made of rock. A new study has found that some New World, capuchin monkeys have been working on their stone toolboxes for the past 700 years. Progress is going slow, but it’s hard to ignore that these animals are basically at the doorstep of their own Stone Age.

The tools in question are anvil-and-hammer nutcrackers. At the base of cashew trees, scientists have observed modern capuchin monkeys in Brazil collecting nuts, carefully arranging them on the large, flat “anvil” rocks, then striking them repeatedly with their smaller, easily-gripped “hammer” rocks. The monkeys are diligent in this task, taking care to avoid striking their fingers and toes, but sticking with their work until the nutritious nut is unlocked. This isn’t easy, because cashews have extremely hard shells, accompanied by toxic fluids in the “apple” they grow in. Humans usually roast cashews to gain access to the meat of the nut, but these monkeys have opted for rocks and elbow grease to get the job done.

The fact that the monkeys seem to leave these tools at the bottom of cashew trees allowed for an important connection to the past. Ancient groves of cashew trees were excavated, which were accompanied by more anvils and hammers, complete with wear and tear assumed to be due to regular usage. Carbon dating the organic material buried along side the stones indicated that these nutcrackers were being used around 700 years ago. This doesn’t prove that the monkeys first adopted this method to each cashews at that point, but it does give us a minimum range for New World monkeys using tools.

By not being decidedly ancient, it also points to the idea that this kind of behavior has arisen more than once in primates. It may influence our understanding of how human tool use began, since we may have witnessed another primate using their stone anvils, or possibly demonstrate a predisposition for this kind of activity. If the earliest date of monkeys using tools can ever be definitively pinned down, it may provide an useful reference point about the human Stone Age— did we graduate from hammer and anvils unusually quickly, or are we just witnessing the natural progression as a species starts developing cultural knowledge? At the very least, with how little the cashew cracking has apparently changed in the last 700 years, it looks like we’ll have a monopoly on cars, airplanes and spaceships for a while longer.