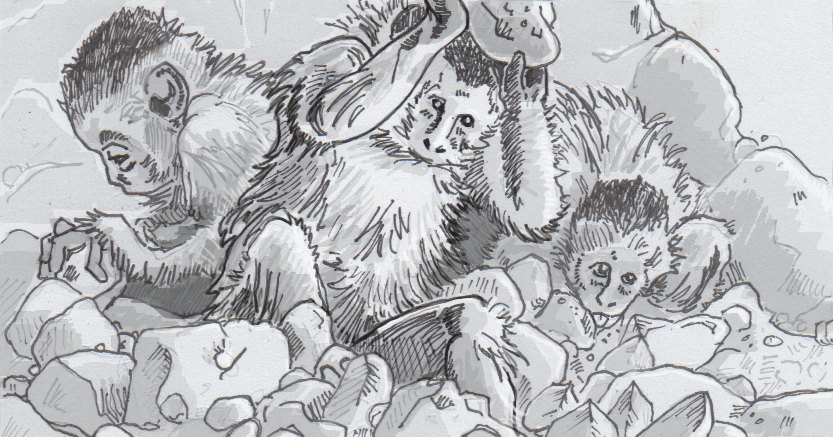 Some of the first technology created by humans were sharpened stone flakes. While they might appear to be simple rocks at first glance, archaeologists have come to note the single sharp edge and flat sides that transform these rocks into tools. The edge would have allowed early hominids to cut meat, remove skin, or work with wood and grass. To create such a tool, our ancestors are thought to have needed advanced hand-eye coordination, as well as the ability to plan the flakes’ design.

…or they would have needed to be weirdo capuchin monkeys making flakes without even noticing.

Capuchin monkeys have been observed experimenting with tool use for many years. They use rocks like shovels to dig up spiders, twigs to poke into crevices for caterpillars, and may have been cracking open cashews in a hammer-and-anvil arrangement for over 700 years. They’re one of an ever-growing list of animals that partake in at least casual tool usage, but their creativity, and perhaps dumb luck, has set them apart.

Bearded capuchins (Sapajus libidinosus) in Brazil’s Serra da Capivara National Park were observed banging rocks together, but not for the sake of getting at fruit or nuts. They were hitting pieces of quartz together with two-handed, overhead strikes, and then licking the broken stones. Researchers aren’t sure if they were trying to lick up silicon or possibly lichen to fill some sort of nutritional need, but they were sure about the stone byproducts of this activity. Many of the resulting pieces of stone were nearly identical to what has been assumed to be carefully crafted stone flakes of human ancestors. The monkeys took no notice of the fine edges or flat sides that would attract an archaeologist, but even the accidental creation of such an object is very significant.

Sharp flakes of stone have always been assumed to be a marker of human-like intelligence and development. They were supposed to be the starting point for human artifacts, kicking off the chain of development that gives us the computer you’re reading this on. Even with other tool-using animals in the world, the sharp flakes of rock were supposed to require more deliberate creation, and were different from the broken rocks wielded by other primates like Chimpanzees and Macaques. If capuchins are making them accidentally, it means that stone flakes alone can’t be considered a reliable marker for hominid activity. Sometimes flakes have been found with other artifacts, like butchered bones or old fire pits, but on their own, we can’t be so sure we’re seeing signs of an innovative Australopithecus, or just a lucky one that wanted to lick some lichen.

In the mean time, we’ll have to watch the capuchins to see if they take notice of the utility of their flaked stones. Maybe this is a window to how specific tool creation got started in the first place?