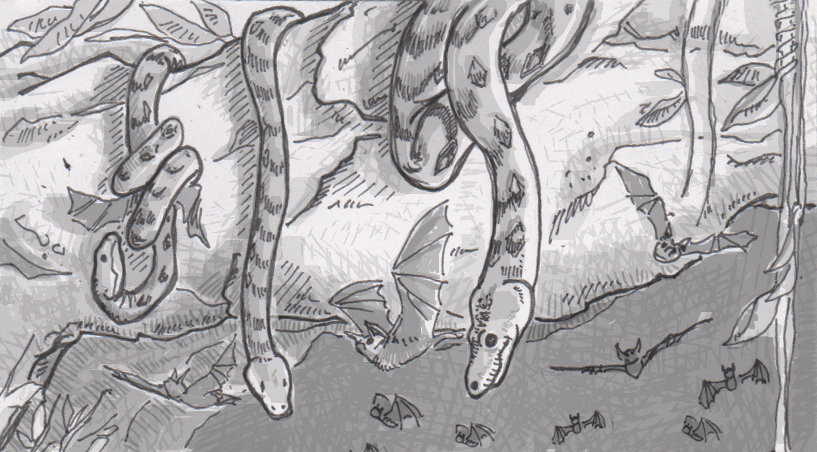 It’s time to stop underrating constrictors. Sure, these snakes aren’t the lightning quick, surprising, pointy-mouthed predators that venomous snakes are, but what they lack in twitchiness they make up for in cunning and coordination. The crushing squeeze of a constrictor may seem mild or slow, but being squeezed to the point where your heart can no longer pump blood is as intense a death as anyone could imagine, even if it can sometimes take hours. What’s more, these snakes have found ways to perfect their hunting techniques to enable the capture of all kinds of prey, including bats that they snatch out of the air. As researchers are finding, the power of a constrictor seems to be in their brains, rather than their venom sacs.

Cuban boa constrictors (Chilabothrus angulifer) have figured out how to catch bats, and not when the bats are prone or sleeping. A snake will move to the opening of the bats’ roost and lower and their head down so that it will be directly in the bats’ path when they start their nightly feeding. Hanging from the tail, the constrictor has to bite at the quick and maneuverable mammals, until it can grab one by the wing, pull it up and being wrapping it in its coiling body to be constricted. As you can imagine, it’s not exactly an elegant process, as getting a bite on a flying bat while hanging upside down, but the boas have figured out a way to improve their odds: bring friends.

When multiple boas arrive at the same cave, they seem to coordinate their positions in a way that benefits every hungry snake present. The snakes were seen to spread out, forming a sort of reptilian curtain across the bats’ exit, making it much harder for bats to find a space outside the reach of at least one snake. As a result, the snakes were able to grab a meal much faster than when they hunted alone, especially since single boas were found to risk being completely unsuccessful with their hunts.

It’s unknown how widespread this sort of group hunting is among snakes, since they’ve widely just been assumed to be solitary animals. If this kind of hunting is critical to their diets, it would mean that conservation efforts may need adjustment, as the snakes actually require a larger population to hunt together, rather than enough individuals to maintain genetic diversity.

Even lone snakes benefit greatly from more sophisticated hunting techniques. The genus of constrictors known as kingsnakes (Lampropeltis) have intrigued scientists for a long time, as they are not only successful hunters when attacking small mammals or lizards, but also other snakes. As their name is meant to remind us, kingsnakes can capture and kill nearly any other snake they come across, partially thanks to their immunity to other snakes’ venoms, and also because they’re just better at constricting than their opponents.

Kingsnakes obviously aren’t the only other group of constrictors out there, but figuring out how they could consistently best their peers, the ratsnakes, was a bit of a conundrum. The grip strength of live snakes was found to be equivalent in both groups, and analysis of muscle tissues showed no obvious source of advantage either. When pitted against each other, neither kingsnakes or ratsnakes had better defenses for wriggling away, but the kingsnakes did show better form in the way they capture prey. Where a ratsnake might make sloppy, haphazard restraints on their prey, kingsnakes make tight, efficient coils that researchers compare to springs or “curly-fries.” They’re therefore making better use of their strength, which is important when you’re starting what can be a very long process.

My kids asked: So who wins when a kingsnake fights a kingsnake? Will they cannibalize each other?

When a kingsnake fights a kingsnake… the kingsnake wins? They will canniblize each other, which can apparently make breeding kingsnakes a difficult process. Presumably in the wild, foreplay helps keep these kinds of rough dates to a minimum.