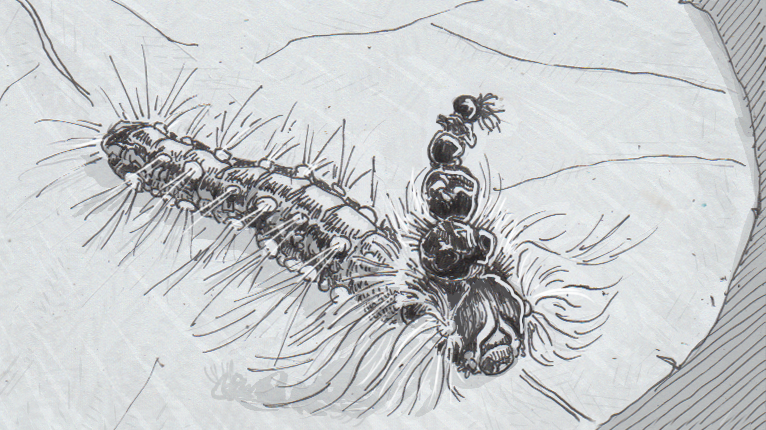 Caterpillar reuses scrapped head-shells to save its live one

Human skulls do a pretty good job of housing our brains, and yet we don’t double up on them when it comes to head protection. Not to sound horribly morbid, but living humans have generally had access to human skulls… not in use… and yet they’re not our go-to material for crafting helmets. Aside from logistics with sizing, it may be due to the fact that our bony heads can be fractured with as little as 16 pounds of force on a bad day, pushing us towards metal, plastic, foams, etc. This whole line of thinking may seem to be completely out of left field, but there are animals that do something similar, and the material guarding their brains is only a few layers of protein and chitin thin enough to be translucent once shed from the body. The actually go all in on the idea, stacking a series of empty head-shells on their current head, seemingly as protection from predators.

Holding onto their heads

The creature in question is the caterpillar known as the gum-leaf skeletoniser. While they eventually end up as a kind of dull moth, Uraba lugens behavior as a caterpillar is weird enough to have earned it the nickname “Mad Hatterpillar.” As you’d suspect at this point, each “hat” in question is actually the head portion of shed exoskeletons. Each time the caterpillar molts, it saves the head from the previous shell and affixes it to its head, eventually forming a little tower of empty head casings, pointed nearly perpendicular to its body.

In many animals, outlandish or unwieldy structures on a body are often tied to some kind of sexual selection (think of moose antlers or peacock tails), but researchers could rule that out immediately because caterpillars don’t go looking for mates until they’ve become moths. This basically meant that the pile of heads was meant to impress, or possibly hinder, predators. When pitted directly against predatory wasps or insects, stacked heads didn’t seem to cause any sign of hesitation in the caterpillars’ attackers, crossing intimidation off the list.

All that’s left then, as far as anyone has seen, is the mechanical protection offered by dummy heads. In enclosed confrontations, the extra heads did function as decoys a bit, taking a few strikes from wasps at first. However, they only seemed to delay the inevitable, never really warding off danger entirely. In the wild, caterpillars with head-helmets seemed to have a slightly better survival rate, indicating that those small delays might be enough to allow for some form of escape. Researchers noted that even a small bit of protection might be worth the effort of saving one’s old heads, since they’re basically free to save and reuse, rather than abandon with the rest of the exoskeleton. With such a low investment, even the tiniest advantage might be worth the trade-off of looking like a creepy lunatic.