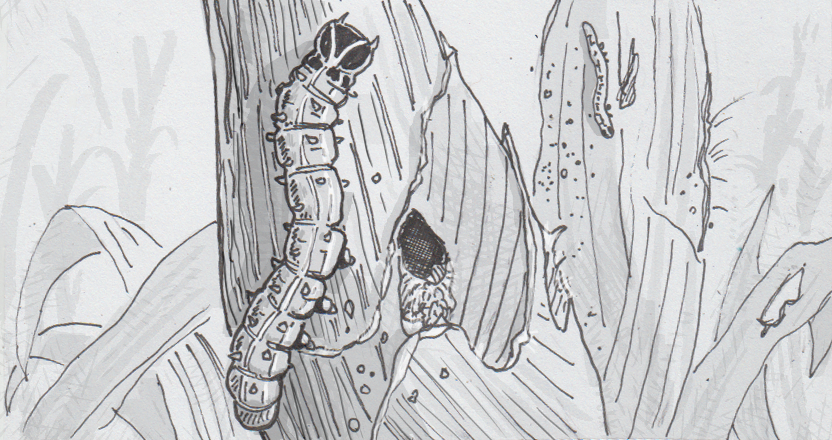 When plants are confronted by predators, they only have so many ways to defend themselves. We know that while they can’t uproot themselves and run away, they’re not exactly passive when under threat. In the case of corn plants, being chomped by an herbivorous insect will trigger the release of a variety of volatiles, which can address everything from healing the site of the bite to attracting potential insectivores to come attack the herbivore. Over time, herbivores like armyworm caterpillars (Spodoptera frugiperda) have developed some countermeasures, including using their poop to use the corn’s defenses against itself.

Creating and releasing volatiles in response to threats is energetically costly, and so the corn plants only try to cope with one form of attack a time. The default is to be on guard for predators, but if a pathogen like a virus or fungus is detected, the usual defense measures are dropped to fight off infection.

The S. frugiperda caterpillars exploit this arrangement by faking a fungal attack with their poop. Their poop, or frass, triggers the same response as a fungus, tricking the plant to assign resources defending against the false threat and leave its leaves open to attack. To ensure this wasn’t coincidence, researchers checked that the caterpillars employing this tactic did enjoy easier meals, and that protein from the frass did indeed pass as a fungal pathogen. In both cases, the caterpillars’ plan seemed to be effective, putting the win back in their corner until the plants have time to evolve a new response.

In the mean time, some good may come of the caterpillars’ deception. If the exact components can be isolated and developed, they could be utilized as a preventative measure against infection in the corn. If a farmer was concerned about fungus spreading in his or her crops’, a frass-like remedy may be able to awaken the corns’ defenses before it’s too late.