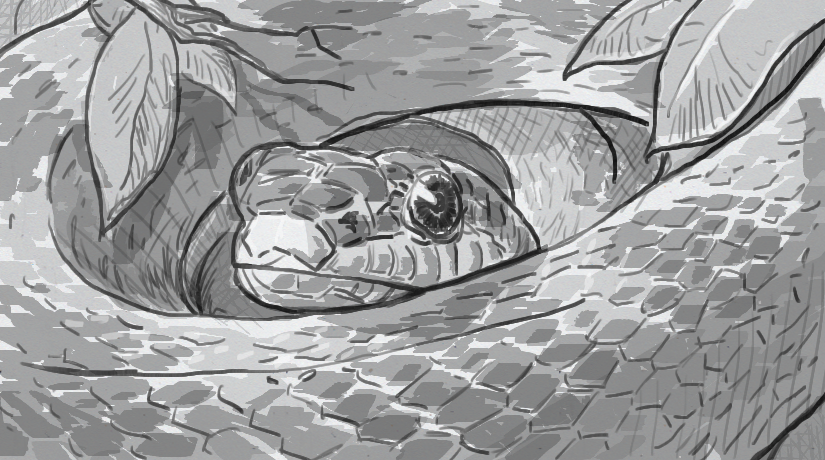 While fossilization of bone alters and distorts the original living tissue to a fair degree, it’s incredibly rough on softer stuff like skin. Most of the time skin is destroyed before it even has a chance to undergo the slow process of minerals replacing organic materials, and even when it does many of the original textures and colors are lost. It may turn out, however, that more detail about ancient animals’ skin has been preserved than we thought. A study of a 10 million year old snake from the Colubridae family has found clues about its coloration, even though our eyes could no longer see it.

Animals with earth-toned bodies usually get their coloration from a pigment called melanin. Different concentrations of melanin can lead to differing shades of reds, browns and blacks, as demonstrated by the spectrum of human skin and hair. Traces of melanin have been found in fossils in the past, but they’re hard to come by. Feather coloration has been reconstructed in a few cases, partially thanks to the fact that the structure of the filaments in a feather can bend light to refract specific colors. If the structure of a filament is in good enough shape, we can figure out how the light would have been refracted, and thus looked, in the original feather. In the case of this ancient serpent however, a different kind of color palette has been found thanks to mineralization of its tissues, with calcium phosphate crystals growing in its skin as it decayed.

Going green (and brown and yellow)

The fossilized skin didn’t look very colorful to the naked eye, but under a microscope scientists were able to see the original shapes of different pigment producing cells. Like a color-by-number kit, they compared those shapes to pigments found in modern snakes, recreating the patterning and colors the ancient reptile once had. In addition to more familiar melanophores to make browns and blacks, they also found structures matching iridophores, associated with iridescent whites, and xanthophores, tied to green pigments.

The resulting patterns looked a lot like a modern snake. It likely had a cream-white belly, with a mottling of browns and greens on its back. Aside from the demonstration of this color-matching technique, this tells us more about this snake’s way of life. Rather than the bright colors of modern coral snakes, or dusty browns of a rattlesnake, this snake appears be sporting camoflauge for hiding under plants during the day.  These conclusions have been helped by surviving animals for comparison, but this technique should help with mineralized skin of all kinds.