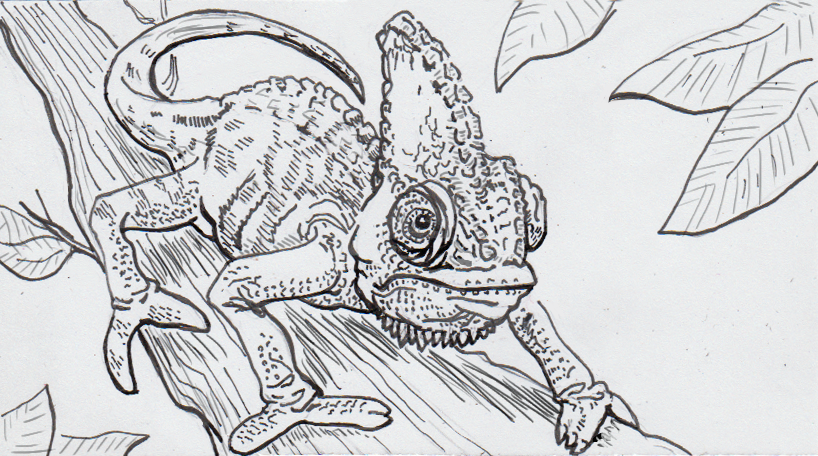 Opposable thumbs are, ahem, very handy for grabbing things. Humans have obviously made great use of our hands, and other animals like orangutans rely on their digits so much, they still have them on all four limbs. Tree-borne chameleons seem to be in the process of taking this concept to the next level, as their feet more or less resemble two thumbs that they can use to clamp onto sticks and branches. Oddly, as they consolidate the number of digits on their hands and feet, they’re simultaneously increasing the number of bones in their bodies.

The structure of the chameleon’s two-toed foot is hinted at by the small array of claws on one of the toes. One “toe” is comprised of two digits, and the other is made of the remaining three fingers, fused by muscles and tendons, sort of like a mitten when you misalign your fingers. More primitive, grass-dwelling chameleons don’t have these fused digits, suggesting that this is an evolutionary recent adaptation to life in the trees. The consolidation allows arboreal chameleons, like the veiled chameleon (Chamaeleo calyptratus), to move more quickly and nimbly along narrow branches.

It would make sense to assume that over time these fused-digits will become one appendage, saving the chameleon the trouble of growing the extra bones. However, observations of chameleon growth shows that their bodies are working in the opposite direction. Embryos were found to have extra wrist and ankle bones, so that do eventually fuse, leading to more flexible ball-and-socket joints for the feet. A series of small bones allows for better flexibility and grip compared to fewer, larger bones, so the reptiles might not be in a hurry to simplify their toes too much.