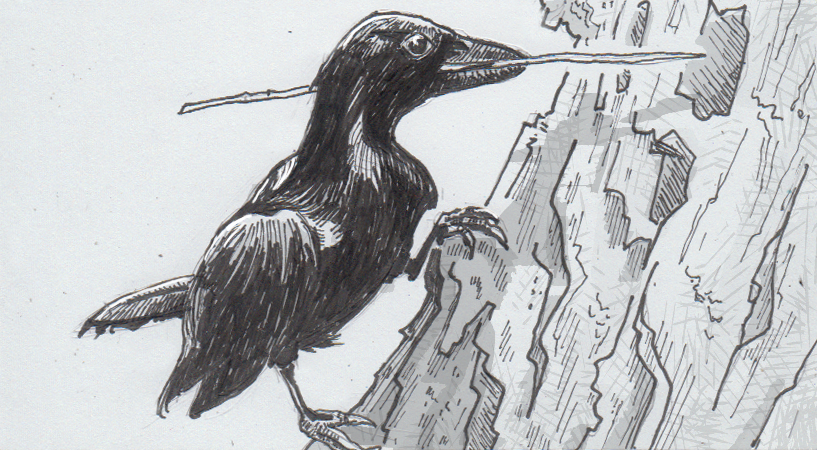 Checking how tool use crafted the beaks of New Caledonian crows

Birds in the corvid family, like crows and ravens, are often celebrated for their smarts. Sometimes, however, their brainy activities are tied to slightly more banal anatomy, like their beaks. New Caledonian crows (Corvus moneduloides) have grabbed a lot of attention for fashioning tools out of sticks and debris, allowing them to better hunt for food, and while this certainly involves some impressive mental activity, it’s likely been enhanced by specializations in the birds’ mouths as well. Similar to how human capabilities have been magnified by our dexterous hands, it appears that these crows’ grip on their tools has pushed their tool use further.

A tool-friendly beak seems to be less for poking, and more for pinching. The tip is less pointed that most birds, lacking the dramatic hook-shape most obviously demonstrated on raptors (“Like an eagle!” offers my first grader.) The top half of the beak is instead straight and nearly blunted. The bottom jaw, or rather, the mandibular rostrum, has developed a slight upward curve, meaning the tip of the mouth comes together in a shape slightly reminiscent of a thumb and forefinger coming together. It adds up to a mouth that can hold a tool with a firm grip, plus is straight and short enough to allow the crow to see and focus on what they’re poking at.

To ensure that people weren’t inventing traits that supported what we thought of the crows’ tool use, computed tomophraphy scans of various species’ beaks were compared statistically. The shape and structure of the New Caledonian crows stood out significantly from other foraging birds, like woodpeckers, indicating that a truly specialized structure had evolved, even though the birds were eating bugs out of trees like many of their relatives. Rather than stick with pecking directly, it seems that crows using tools provided enough of an advantage that when fishing longhorn beetle grubs out of trees that the tool usage became it’s own evolutionary influence. Over generations, crows with more tool-friendly mouths were more successful, coming to dominate the gene pool.

At this point, the tool-usage seems to be integral to New Caledonian crow hunting. Individuals even have personal preferences about which side of the head to line their twigs up when hunting, almost like being right- or left-handed. This tool-using lifestyle of course has also helped shape the birds’ brains, and they’ve proven that while they’ve specialized in sticks, they can be flexible about what tool they’re using if the need arises.