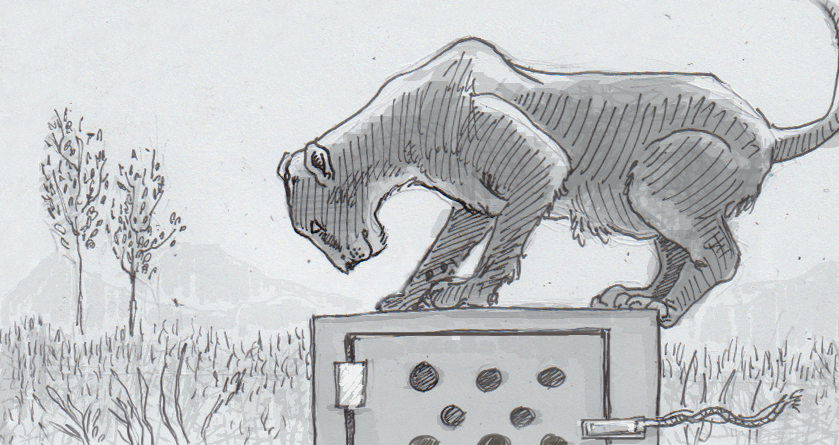 Checking if cooperation has made for cannier carnivores

Fiction is rife with characters who work alone. It’s cleaner, simpler and therefore easier than forming attachments and cooperating with others. And they’re mostly right— understanding and coordinating around the wants and needs of others as a way to get what you want requires a lot of mental energy. But while ‘lone wolves’ avoid relying on others, actual wolves seem to have adapted quite well to such pressures, and scientists hypothesize that working with others is actually a reason some species have bigger brains, or at least, better problem solving skills. If you can work with a sidekick (or pack of them,) a task like getting food out of a box should be easy, right?

Who can unlock their lunch?

To really test if socialized creatures have developed better problem solving, a series of trials were conducted with 48 animals from a variety of carnivorous, mammalian species. Each participant was placed alone (excusing some hyenas who had up to four compatriots) in an enclosure with a sturdy box baited with fragrant meat. Animals were underfed, to help ensure their motivation to access the food. To do that, they had to simply yank on a rope attached to the box, which was the only real graspable portion of the contraption. As frequent tool users, this arrangement may seem obvious to humans, but for the hyenas, tigers, lions and leopards, this was a very unusual, and importantly, novel situation to be in. Animals were watched for how much they tried to interact with the box, but they only had 10 minutes to discover that the rope was the key to their lunch.

There wasn’t a clear sweep, but the social carnivores like lions and hyenas did perform better than solitary tigers and leopards. Lions were the most curious and experimental, with an abundance of pawing, digging, etc., while hyenas were the most consistently successful test subjects. On the other end of the spectrum, only two of seven tigers figured out the puzzle.

Are we sure this are smarts?

Interpreting these results isn’t completely straightforward. Critics have noted that a box like this doesn’t represent anything about these animals’ natural ecologists, although that seems like it would support the idea that there’s some raw critical-thinking at work in the successful species. The lions don’t have an analog for a locked box in their evolutionary history, but they… sorry… thought outside their species’ box and got the food anyway.

More direct contradiction comes from a similar study involving puzzle boxes, but focusing on relative brain mass. In that study, which included a wider range of species, success seemed to correlate more with having a larger brain in proportion to your overall body mass, leading to big wins among bears. This is notably different from raw brain size, which is why the huge brains of elephants and whales don’t guarantee them a shot on Jeopardy any time soon. There are also plenty of cases where relatively large brains cross over with socially-oriented animals, such as say, crows and ravens. At the very least, it looks like our fictional heroes would be well served to cooperate, even if they wear a size 8 hat.