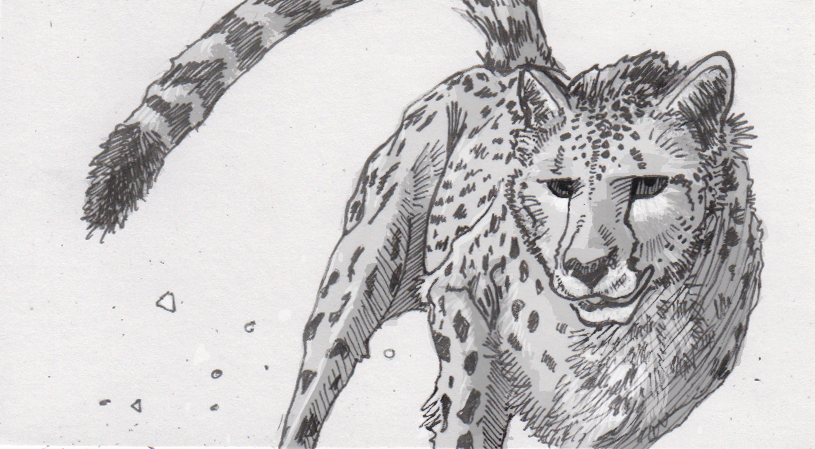 Cheetahs don’t run fast to set records. They run to catch food. From that perspective, it makes sense that some of their most important adaptations aren’t only found in their long legs or flexible spines, but in their heads to help guide them towards their prey. A study of the big cats’ inner ears has found that they’re possibly the most advanced, and most recently developed, feature that helps cheetahs not just run after, but also catch their elusive prey.

Inner ears aren’t used for hearing. They’re a specialized structure in the skull that tells vertebrates how their heads are oriented, like the accelerometers in your phone or video game controller. Each inner ear consists of three semicircular canals that contain fluid and sensitive hair cells. The fluid levels off thanks to gravity, tickling some hair cells but not others. With each canal handling a different direction of motion, such as side-to-side versus tilt, the combined data can be used by the brain to figure out how a head is not only oriented, but how it’s moving through space. This kind of information is crucial for movement and balance, especially when that movement is coming from a 65 mile-per-hour sprint after an unpredictable gazelle.

For a cheetah (Acinonyx jubatus) to stay on target, it needs to maintain visual contact with its prey. Even when their body is careening in a new direction, cheetahs do a great job at keeping their head steady so they can keep track of how their prey is moving. Researchers suspected that their inner ears were somehow enhanced to make this possible, and started scanning the skulls of cheetahs and other big cats with X-ray computed tomography, giving them a detailed, 3D view of how each animal’s ears worked. As expected, cheetahs were found to have larger and longer inner ear canals than other cats, which would give the fluid and hair cells more granularity in the signals they could provide. To put it another way, these super-sized sensors could pick up smaller variations in tilt and movement, plus have a slightly bigger range before those signals were “maxed out” at one extreme or the other.

By including the skulls of extinct cat species in this study, researchers were also able to estimate when cheetahs acquired this degree of sophistication in their inner ears. An extinct relative, Acinonyx pardinensis, was also specialized for running, but its ear canals wouldn’t have provided the same feedback found in a modern cheetah. That bulkier relative lived only a few hundred-thousand years ago, showing just how recently this line of cats evolved this degree of sensitivity. That timing may make sense, since A. pardinensis probably wasn’t as fast as a modern cheetah either, and thus didn’t need quite as much control and maneuverability as today’s record-holding runners. As top speeds increased over time, it seems that the sensors and feedback systems to help the animal steer grew as well.

My third-grader asked: If balance is connected to your ear, do deaf people have problems with balance?

They can. One estimate says that as many as 30 percent of deaf people may experience some kind of persistent balance problem. Apparently the cause of the hearing loss, such as meningitis versus  something like Usher’s Syndrome, can affect how severe the balance issues may be.