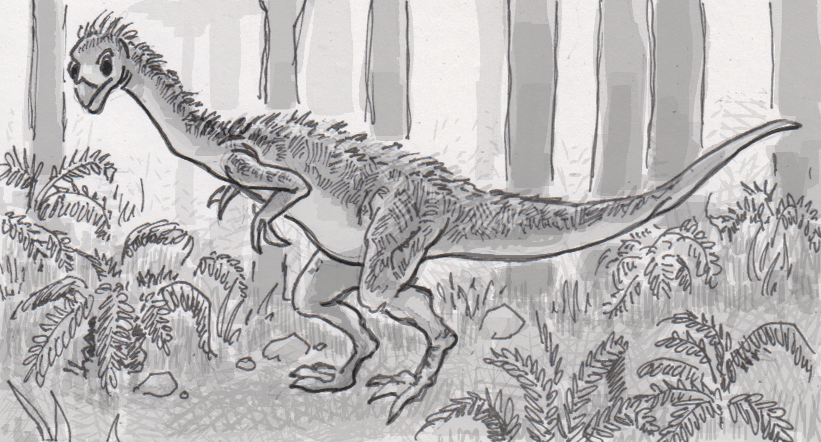 When we first heard about Chilesaurus diegosuarezi, the unusual dinosaur was being labeled as a rare, herbivorous theropod. The creature’s leaf-shaped teeth just didn’t look up to the task of tearing meat compared to the pointed and sometimes serrated chompers seen in most theropods. The was speculation that this strange hodgepodge creature was a weird hiccup in theropod history, but new analysis suggests that C. diegosuarezi wasn’t a plant-eating theropod, but a bipedal ornithischian. If correct, this dinosaur may represent beginnings of the family tree we now associate with Stegosaurus, Ankylosaurus, and various duck-billed dinosaurs like Edmontosaurus.

C. diegosuarezi’s interest in eating plants isn’t being questioned. If anything, it’s thought to be an important factor in why his body has some more ornithischian traits. The big deliminator between theropods and ornithischians is usually the shape of their hip bones. Theropods, both before and after C. deigosaurezi, have what’s been called a “lizard” hipbone, because the pubis bone faces forward like on modern lizards. In contrast, ornithischians have “bird” hips, where the pubis faces backward. It’s all a bit confusing, because modern birds are actually theropods, even with that ornithischian-looking hip bone. With C. deigosaurezi being classified as an ornithischian too, it means that a rear-facing pubis bone must have evolved at least twice— once when the ornithischians first branched off the theropods, then again when with the development of birds.

What pressures moved the pubis bone

This may seem like a lot of arbitrary changes in anatomy, but there are explanations for why they would help each lineage survive. The plant eating of ornithischians would require bigger, more complex guts to digest than chomped flesh would, and so they’d literally need more space their abdomens. A forward facing pubis probably didn’t leave enough room for their digestive demands, giving an advantage to herbivores with “bird” hips.

While we now have birds that eat plant-based foods like nectar and seeds, digestion probably isn’t the reason a crow or sparrow ended up with a rear-facing pubis. In that case, the evolutionary pressure may have been balance. Modern birds don’t have the thick, muscular tails older theropods had, and so as their tails were reduced to the feather-covered stumps we know today, their center of gravity shifted. To avoid tipping over too much, the pubis bone evolved to face backwards, taking a bit of weight with it.

Obviously, C. deigosaurezi’s hips weren’t putting it on the road to flight, but were making room for a bigger tummy. Combined with a mouth well-suited for eating plants, it suggests that adapting to an herbivorous diet was a driving factor in the split between theropods and ornithischians. This then raises questions about what was happening in these creatures’ environment to make plant-eating so enticing that such transitions would occur. Changes in the continents were likely leading to more moisture on land, making the world a much more attractive salad bar, providing options to creatures that were trying out eating more than meat.

Source: One of the Most Puzzling Dinosaurs Ever Discovered Just Got a Major Rebrand by George Dvorsky, Gizmodo