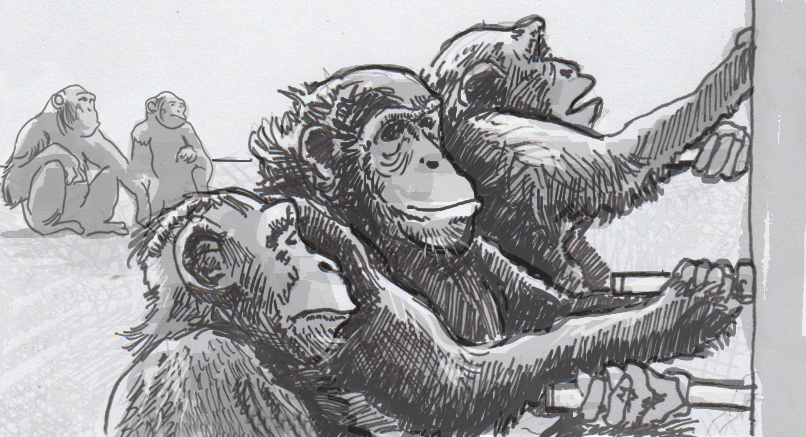 We start teaching our kids to share and cooperate before they can even speak. We’re understanding that babies “don’t know any better” when they take a toy away from a peer, but we’re confident that sharing and respecting ownership is the goal to strive for. That sense of fairness may not always prevail, but it may be deeply ingrained in us, going back to a more ancient ancestor in our primate family tree. As it turns out, chimpanzees also have a drive to cooperate, and will intervene against individuals who don’t uphold those standards.

In the wild, chimpanzees (Pan troglodytes) are not famous for their cooperative behaviors. They are social animals, will form close, personal bonds with each other and collaborate on larger goals, but if given the option, most seem to prefer to keep to themselves for tasks like finding food. Their brains are fairly limber though, and so when presented with a task that required cooperation, some captive chimps proved that they were quite capable of working together.

A group of 11 chimps were gathered in a large enclosure where they could choose to participate in a test of their cooperation as they saw fit. A tasty reward was placed in an apparatus that required two chimps to open. The first was needed to open a gate while the second removed a tray with the promised fruit on it. The two could then opt to share the spoils of their efforts, which was actually the most common outcome, occurring 3,565 times over 94 hours of testing. Once chimps seemed adept at this concept, a second gate was added, requiring yet another individual team up to get to the food, although that complexity didn’t seem to deter further cooperation.

Between the three participating chimpanzees, plus the other observing animals nearby, a lot of trust was required by the chimps lifting the gates, and while it didn’t happen too often, that trust was sometimes violated. Taking more than a fair share of food was definitely noted, and greedy individuals were often excluded from further turns at the apparatus as punishment.

Harsher punishments were doled out to chimps who outright stole food without participating in its acquisition first. Theft of the reward was not only a problem to the chimps earning the food, but even to others who had just been observing. In 14 of those cases, thieves were physically attacked by other observing chimps, most often a dominant member of the group. This sense of “right” may seem immediately familiar, as humans often respond with similar zeal on issues of fairness and theft, responding with reprimands, shaming, violence and more elaborate deterrents like imprisonment.

All this suggests that our interest in sharing and fairness may have been inherited from an ancestor shared by both Homo sapiens and P. troglodytes. Cooperation can provide many advantages for a group of social animals, and so its not hard to imagine the evolutionary pressures that would have rewarded animals that shared the risks and rewards of finding food with kin. Apparently dealing with those individuals who don’t feel like cooperating has been a concern for our lineage as well.