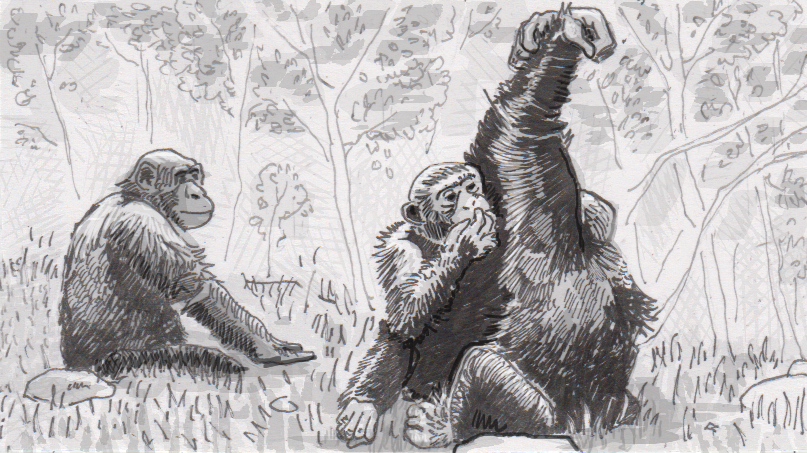 Chimpanzees’ grooming habits are molded by their interactions with their mothers

You may have your mother’s eyes, smile or body type, but do you have her grooming habits? Most moms probably mention the idea that brushing one’s teeth and bathing are probably a good idea, but for chimpanzees grooming can represent a lot more. Picking twigs, dirt and bugs off of each other is a big part of chimps’ social interactions, and long-term studies have found that in many cases, even subtle idiosyncrasies in how grooming is handled is passed down from mother to child. The flip side is that when mothers have been absent from a chimp’s childhood, grooming and socialization is much more limited throughout their lives.

How to arrange one’s arms

The specific gesture that scientists have observed has been called “high-arm grooming,” which is a fairly descriptive term, as weird as it sounds. When chimps groom each other, they will each raise an arm and hold hands, or cross their arms, perhaps to allow access to each other’s bodies from a close, frontal orientation. It doesn’t seem to have huge repercussions in chimp societies, but with grooming taking place as many as ten times a day, it was hard to ignore and decipher.

Since grooming has long been thought to be a way to reinforce social bonds, researchers looked for patterns concerning arm-raising and group dynamics. Did specific arm motions indicate acceptance of new members or dominance? In the end, preferred arm-positions proved to just stem from the way a chimp’s mother held her arms, which makes a lot of sense when considering the fact that young chimps are groomed almost exclusively by their own moms until they’re 12-years-old.

Grooming when close connections are absent

A different study looked at female chimps who were orphaned before they were two-years-old. Whether raised alone in a cage or even in a social group in a zoo, orphaned chimps seem to be affected by the maternal grooming sessions they missed out on for their entire life. Even if given free reign to interact with other chimps later in life, they never establish as many grooming partners or put as much energy into grooming as chimps that were raised by their moms. Unfortunately, this study didn’t specifically mention how these orphans positioned their arms when they did engage in grooming.

Despite all this evidence pointing to the social side of chimpanzee grooming, it’s not completely ruled by social pressure. Male chimps were observed around relative strangers, and they would try to initiate grooming activity with each other, particularly if there were fewer bystanders in the area. It appears that more observers may indicate to the chimps that they’re more likely to find one of their preferred social partners in the area, but if only a strange is available, they’ll just have to do. It’s a small reminder that while grooming may be tied to social bonds, on some level it’s also just practical to get the bugs out of your fur, just like mom intended.