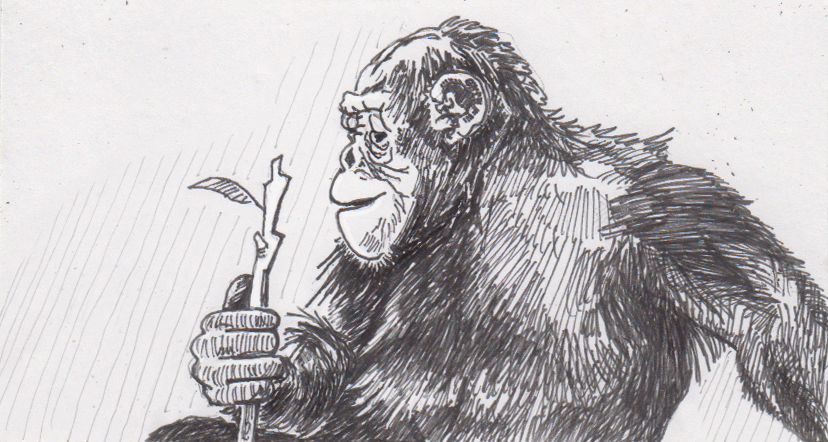 While humans love our tools so much that we strap them to our faces, we’re certainly not the only animal to use objects to improve our lives. Crows use sticks to access food, monkeys use rocks to open nuts, and dolphins use sea sponges to find hidden prey. In many of these cases, there seems to be a cultural component to the spread of any particular technique— the sponging dolphins, for instance, only pick up those particular foraging behaviors if their mother teaches them. In chimpanzees, the transmission of tool use is less clear, as some stick use seems to be localized, while other studies have found that chimps’ may have some innate ingenuity the is the mother of their inventions.

An example of an apparently localized specialization can be seen in the chimpanzees of the Fongoli savanna in Senegal. Many chimps are known to wield sticks for various tasks, like fishing for termites, but this group has invented a tool that’s engineered for use as a probe and a spear. There’s a five-step process making these spears requiring cleaning the shaft of twigs and leaves, plus chewing one end to sharpen it into a point. Once finished, the weapon-wielding chimps would then use them to both find and spear bush babies hiding in trees, going as far as to check the tips of their spears for traces of blood to know if they were on target or not.

Like much tool use, these spears opened up new opportunities for chimps that didn’t or couldn’t participate in the group’s primary hunting activities. Adult male chimps hunt for meat by other means, but the specialized spears allow female and juvenile males to find their own food, a strategy that becomes more important when other food sources are seasonably scarce.

There’s a good chance that the development of these spears and their usage is the result of iteration and cultural transmission of knowledge. More and more examples of animals learning from the examples of their peers and parents are being discovered, even if it’s not strictly tied to tools. Other researchers have been curious about tool use in the other direction- how does it get started? Based on the example above, if a generation of chimps grew up without the tools and techniques invented by their parents, would they be left bewildered when presented with rocks, sticks or other would-be tools?

Scooping with sticks, from scratch

A separate study looked into just that, presenting captive chimpanzees as the Twycross Zoo with some raw materials that are regularly manipulated by some of their wild counterparts. Wild chimps are known to use sticks to collect protein-rich algae from rivers and ponds, basically like crude fondue-forks. Under the assumption that, like spearing bush babies, this method for algae-scooping had been taught by one chimp to the next, researchers gave captive chimps some nondescript sticks and buckets of water with bits of food floating in it. They wanted to see what the chimps would come up with to solve this little challenge on their own.

The captive, naive chimpanzees not only engaged with the task, they started scooping food in a very similar manner to their wild kin. The resemblance to the wild algae scooping was significant, as the captive chimps even adopted the same scooping motion to use their sticks. This all suggests that at least some of the object manipulation that chimpanzees engage in is built into their brains to a certain extent. It’s not necessarily singularly-focused instinct, but a predisposition for exploring what objects can do. Expanding this line of thinking out to other primates like humans, we know that human brains have internal reward loops for learning new things, and so this kind of foundation may be enough to get us to experiment with just about anything we can get our hands on, including sticks.

Source: Chimpanzees Learn to Use Tools On Their Own, No Teaching Required by Leah Froats, D-brief